What Can a Mass on the Pancreas Be Other than Cancer? 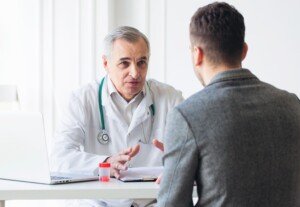 “There are many different types of masses that can occur in the pancreas,” says Jordan Winter, MD, a hepato-pancreatic-biliary and oncology surgeon and Chief of the Division of Surgical Oncology at University Hospitals Cleveland Medical Center.

“However, the majority of asymptomatic masses are benign and are typically benign cysts,” says Dr. Winter.

However, if a mass is discovered on the pancreas, there’s an 85 percent chance that it will be the deadly adenocarcinoma.

“If a patient presents with jaundice [yellowing of the skin] and a mass, there is a about a 90 percent chance” that the mass will be malignant, adds Dr. Winter.

“Masses can be tumors [benign or malignant] or non-tumors,” says Dr. Winter.

About 30,000 people in the U.S. are diagnosed every year with an adenocarcinoma — the deadliest of pancreatic cancers, comprising 85 percent of all the tumors that are found in this organ.

The Other 15 Percent of Pancreatic Masses

Cystic tumors comprise the majority of masses found in the pancreas.

“Two to three percent of people walking around in their 60s likely have an asymptomatic, benign and not worrisome cyst,” says Dr. Winter.

Dr. Winter also explains, “Many of these benign cysts can develop into cancer over time, but they do not in the majority of cases.

“Therefore, sometimes we recommend removing them, but not always.”

Most pancreatic cysts are mucinous, and these are usually benign. But if untreated will likely turn malignant. A cyst is a non-solid mass.

“There are certain rare cystic tumors that are more common in woman, including mucinous cystadenomas and solid and pseudopapillary tumors.”

Serous cystadenoma. This has a distinct honeycomb appearance on a CT scan and is usually benign.

Papillary cystic neoplasm. These are precancerous lesions that need to be removed; otherwise they may morph into adenocarcinoma.

“Solid malignancies of the pancreas include conventional ductal adenocarcinoma and pancreatic neuroendocrine tumors.”

Pancreatic pseudocyst. This is a benign collection of fluid around the organ and is associated with pancreatitis.

“Again, all masses should be evaluated by a pancreatic surgeon or pancreatic gastroenterologist, but the majority are not cancer.”