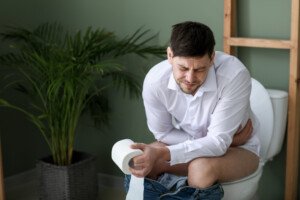 One day I began noticing oddly shaped and colored bowel movements that were loose enough to be considered mild diarrhea.

I thought this was related to my period, which was due in several days.

Very soft stools preceding the onset of menstruation had happened to me before, so I really didn’t think a whole lot about this.

However, it was difficult to dismiss the fact that these poops just plain looked weird.

I really began worrying when every day, I kept having this strange looking diarrhea, and my period had already begun.

So I knew this diarrhea wasn’t related to menstruation at that point. Furthermore, I was getting up in the middle of the night to have this diarrhea.

And like clockwork, almost right after getting out of bed in the morning, I had to do another poop. I’d feel this odd unfamiliar churning in my lower stomach. I knew something was wrong.

I was also wondering why the joint aches that began more than a week prior to my period were still with me.

My menstrual related joint aches (PMS) had always disappeared by the time I officially began flowing.

But this time, the joint aches – and the diarrhea – persisted even after my period ended.

At the time, I didn’t connect the joint aches to the diarrhea. Instead I attributed them to some oddball hormonal fluctuation related to my monthly cycle.

I soon had a colonoscopy and some tissue samples from my large colon were extracted and set to a lab for analysis.

A few days later I was told I had microscopic colitis of the lymphocytic type.

This is a benign inflammatory bowel disease.

The cause is not known, but in my case, the onset was preceded by enormous longstanding anxiety over a family situation.

Since being diagnosed with microscopic colitis (which, by the way, is known for causing transient joint aches), I have written quite a few articles about this uncommon condition. Below are links to some of them.