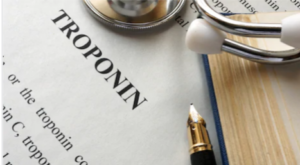 The prognosis for people having coronary bypass surgery (aka “CABG”) seems to be related to the elevation of creatine kinase or troponin, two enzymes that are “leaked” from dead heart tissue, says a study that’s reported in JAMA (Feb. 9, 2011).

Keep in mind that elevated levels of these cardiac enzymes is common.

The elevation of creatine kinase and troponin are indicators of heart muscle-cell death.

But small studies have shown an association between the elevation of these heart enzymes (24 hours post-op CABG) and a worse prognosis.

Nevertheless, there are no definitive studies sealing this in stone, either. For the study that appears in JAMA, researchers investigated the relationship between the elevation of the cardiac enzymes, following CABG, and early, intermediate and also long-term mortality.

Troponin, creatine kinase, or both of these heart enzymes were studied, along with data pertaining to mortality, of the CABG patients.

Information on almost 19,000 patients was collected, with a follow-up period varying from three months to five years.

Ratios relating to the heart enzymes were calculated, and then correlated to 30-day mortality rates.

The study authors write: “The model suggests that a CK-MB ratio value of 4 to 5 results in an expected 30-day mortality that is more than double that for a CK-MB ratio of 1.

Even when other variables were taken into account and adjusted for (such as renal dysfunction history, age, and prior heart attack), the CK-MB ratio remained the most potent predictor of death.

This mortality association was strongest at the 30-day mark post-CABG.

However, the link continued from the 30-day mark to one year out, and a trend existed from one to five years following coronary bypass surgery. These findings were also revealed with the troponin ratio.

Again, elevation of these heart enzymes are common after coronary bypass surgery, but the study authors write:

“…our data make clear that the long-term prognosis is worse for patients who experience even a small elevation of CK-MB than those who do not experience such a increase.”

The study authors add that these findings warrant confirmation from large prospective studies, but nevertheless, there are “clinical implications in terms of “long-term prognosis for cardiac enzyme elevations following CABG surgery, particularly among those with very high levels.”