Can Daily Aspirin Cause Chronic Subdural Hematoma in Elderly? 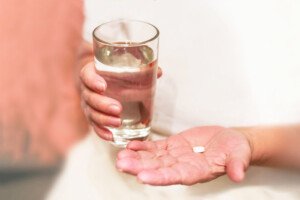 Since aspirin is a blood thinner, how likely could this drug trigger a chronic subdural hematoma in an older person who’se on a daily aspirin regimen?

The issue becomes mighty tricky when an elderly person must take aspirin every day, and at the same time, is at risk for chronic subdural hematoma.

Being elderly, in and of itself, is a risk factor for chronic subdural hematoma.

“As a blood thinner, daily aspirin use can increase the risk for subdural hematoma formation in the elderly,” says Kangmin Daniel Lee, MD, a neurosurgeon with New Jersey Brain and Spine.

“Over time, they become chronic.”  They can also slowly bleed over time, versus the kind that a boxer or skier might suffer, in which the bleeding is rapid and deterioration comes quickly.

“As people age, brain atrophy occurs and brain volume decreases.  Since the elderly are at increased risk for falls or other minor traumas, there is an increased risk that such traumas could tear a small bridging vein and result in a hemorrhage,” explains Dr. Lee.

Atrophy means shrinkage; the brain has a tendency to shrink as a person gets older.

Dr. Lee continues, “Because aspirin is such a common and often necessary medication for those with a history of stroke or cardiac disease ( i.e., a cardiac stent), the immediate or near immediate risk of a bad event such as a repeat stroke or stent occlusion will often outweigh the remote risk of a subdural hematoma.”

The reason aspirin increases risk of chronic subdural hematoma is because aspirin thins the blood; thin blood is more likely to bleed (less likely to clot).

Blood thinners are a godsend for people at risk for clotting disorders, which can be life-threatening if not treated promptly.

But to prevent clotting (i.e., stroke, heart attack, deep vein thrombosis), the risk then goes up for chronic subdural hematoma, which translates to slow, gradual formation of a mass of blood beneath the dura of the brain.

“I believe that the risk of subdural hematoma is probably under-emphasized with the elderly patient who takes aspirin, and should be more widely discussed.

“Certainly when a neurosurgeon sees an elderly patient who has been on aspirin and has developed a chronic subdural hematoma, there is a thorough discussion of the risk of a repeat hemorrhage.”

The possibility of chronic subdural hematoma was never mentioned to my elderly mother after it became clear to hospital staff that she was at risk for falling due to orthostatic hypotension; she was recovering from coronary bypass surgery and was on daily aspirin … and also on the king of blood thinners, Coumadin!

Six and a half weeks after surgery, she blacked out while standing in the bathroom, fell dead-weight and hit her head on the bathtub.

No symptoms…until six weeks later when she awakened with the worst headache she’d ever had, and compromised function of her legs.

Diagnosis in the ER later that day: chronic subdural hematoma!

“Also, chronic subdural hematomas can often go unrecognized, as patients can often be minimally symptomatic,” says Dr. Lee (who was not my mother’s neurosurgeon).

“With the general population living longer and getting more medical attention, the reported incidence of chronic subdural hematoma will likely increase, and greater scrutiny will likely be placed on the routine use of antiplatelet agents (like aspirin).”