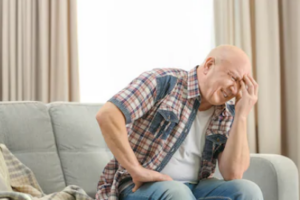 The symptoms of a stroke and a chronic subdural hematoma are strikingly similar —  nearly identical — and in some cases ARE dead-on identical, even though the causes of these conditions are quite different.

For this article I consulted with Kangmin Daniel Lee, MD, a neurosurgeon with New Jersey Brain and Spine.

Distinguishing at home the difference between the symptoms of stroke and those of chronic subdural hematoma.

My mother had a chronic subdural hematoma and I thought she’d had a minor stroke. So did the ER doctor after examining her.

In fact, the ER doctor didn’t even offer the differential diagnosis of chronic subdural hematoma.

All I heard was possible stroke. Dr. Lee (who was not my mother’s neurosurgeon) explains:

“There is too much overlapping symptoms with chronic subdural hematoma vs. stroke to be able to reliably diagnose one or the other simply based on clinical presentation.

“Most often, patients with chronic subdural hematoma will complain of gait instability, headache, confusion, language difficulty or weakness.  These are also common presenting complaints of stroke.”

My mother’s sudden onset of symptoms began early in the morning with a raging headache, and when she got out of bed, it was clear that there was a compromise in her ability to walk.

Though at that time, I passed it off as a side effect from the headache – who wants to march across the room while suffering the meanest headache ever?

But as the morning progressed I clearly observed something not right with my mother’s walking, and what was particularly alarming was that the left leg had a slight drag.

There was profound weakness in her lower body that made it extremely difficult for her to get out of a chair.

I then wondered about the symptom of sudden-onset double vision, which can occur from a mini-stroke, also known as transient ischemic attack.

Deductively, sudden-onset double vision can also be a symptom of a full-blown stroke.

But can a chronic subdural hematoma cause sudden-onset double vision?

And are there symptoms of a stroke that would never be caused by a chronic subdural hematoma?

Dr. Lee responds, “Unfortunately there really are no clinical symptoms that would necessarily distinguish between the two.

“The clinical symptoms of a stroke are dependent on the clinical function of the brain tissue that is damaged.

“In terms of timing, one could say that stroke is more commonly associated with an acute presentation, while cSDH will generally occur gradually and progressively.”

This is a compelling point, because my mother had two incidents of chronic subdural hematoma:

1) sudden onset of symptoms six weeks after hitting her head, and

2) 10 days after drainage of this cSDH, her left hand began losing function, and marginally altered mentation began setting in – both in a subtle way – and both caused by a recurrence of the original chronic subdural hematoma (there is a 15 percent recurrence rate).

There was nothing “acute” about this second set of symptoms.

Stroke was the fartherest thing from my mind, based on my mother’s very recent history of chronic subdural hematoma, and the progressive nature of her new symptoms.

But note that Dr. Lee says:  “However, this is not a hard and fast rule, as chronic subdural hematoma can also cause acute symptoms such as altered mentation or weakness.”

The first incident of chronic subdural hematoma in my mother, as mentioned already, were acute in that in the weeks prior, she was doing great, zipping all over the place at stores, and the night prior to her awakening with a headache that was bad enough to bring her to tears, she was completely normal.

The only way to differentiate between stroke and chronic subdural hematoma, regardless of symptoms, is with a CT scan of the brain.

Don’t assume that someone’s symptoms must mean chronic subdural hematoma just because he hit his head recently, either; it can still be a stroke, unrelated to the head trauma.