Most Common Symptoms of Chronic Subdural Hematoma in Elderly 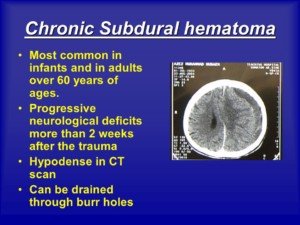 The most common symptoms of a chronic subdural hematoma in the elderly differ from those in younger patients.

“A chronic subdural hematoma is a collection of blood on the brain’s surface, under the outer covering of the brain (dura),” says Sashini Seeni, MD, a family medicine practitioner with DoctorOnCall, an online doctor and pharmacy.

“It is a common neurological condition affecting the elderly,” continues Dr. Seeni.

The chronic nature means this situation begins showing symptoms at least a few weeks after the head trauma (which in elderly people, may be quite trivial such as banging their head on a car door frame when getting into the vehicle).

“Chronic subdural hematoma enlarges from recurrent bleeding in the subdural space which comes from the leakage of blood of a torn vessel into a space below the dura mater,” explains Dr. Seeni.

The Postgrad Medical Journal (2002, Vol. 78) provides an extensive list of symptoms pertaining to chronic subdural hematoma in the elderly.

An altered mental state is the most common presentation, says the PMJ paper.

This occurs in 50-70 percent of patients. The alteration in mental status can mimic delirium or dementia, says Dr. Seeni.

“Thus, they should be considered in the differential diagnosis of elderly patients presenting with neurological signs and symptoms.”

My elderly mother had a chronic subdural hematoma twice: the initial one and a recurrence about 10 days later.

Her mental state with the first one seemed normal, though it was odd that she wasn’t alarmed over her severe leg weakness.

Her mental state with the recurrence was altered: a mild level of impaired reasoning.

As my mother’s recurrence unfolded, she developed acute delirium, but the ER doctor attributed this to an adverse reaction to the Medrol Pak (oral steroid drug to reduce brain inflammation).

Unconsciousness is another possible symptom of chronic subdural hematoma in the elderly.

This is the next category of most common symptoms of chronic subdural hematoma in elderly patients.

One study, as reported in the PMJ, found that 58 percent of elderly patients suffered weakness on one side of the body. My mother had it in both legs.

Focal (confined to a specific part of the body) deficits will usually remain persistent, rather fluctuate, says the PMJ.

My mother’s significant leg weakness never subsided prior to treatment.

However, it’s not known how insidiously it developed because at around 7 a.m. that morning, she reported feeling normal when she arose to use the bathroom.

She returned to bed and around 10:30 a.m. got up, and that’s when a mobility problem was quite obvious.

“The pressure of hematoma in the subdural space causes the headache in the elderly,” says Dr. Seeni. 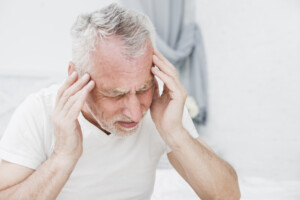 Headache incidence varies from 14-80 percent depending on the study, says the PMJ.

My mother’s initial occurrence included a “crown of thorns” headache, as she had described it at the time.

Though headache is the third category of likelihood of symptoms reported in the PMJ, a headache is a less common symptom in the elderly than in younger people with chronic subdural hematoma.

This is because there’s less space in the bigger brain of a younger person for the fluid buildup to occur.

A study of 43 elderly patients found that falls occurred in 74 percent, notes the PMJ report.

Ironically, falling as a symptom of cSDH can make the cSDH worse.

Falls as a symptom may result from neurological deficits, altered mental state or postural disturbances.

Seizures are a rare symptom of chronic subdural hematoma, though patients with pre-existing epilepsy may have increased seizure activity with a cSDH.

A chronic subdural hematoma can produce a simple partial seizure as its only symptom. This can mimic a transient ischemic attack.

The PMJ says the incidence of TNDs is 1-12 percent. In the elderly the most common TND symptom from chronic subdural hematoma is one-sided paralysis or numbness.

There’s been at least one case reported of on-and-off partial paralysis of the lower limbs due to a cSDH on both sides of the brain.

Vertigo; fast, uncontrollable eye movements; tremoring (Parkinson’s-like); right-left disorientation; unawareness of one’s fingers; inability to write; inability to do simple math; and slowly tilting towards a fall without making postural adjustments due to unawareness of this.

My mother’s recurrence of chronic subdural hematoma produced a most intriguing symptom: left side neglect.

A person with severe left side neglect may refuse to believe that their left leg and arm are theirs.

My mother would make right turns when told to go walk left, and would try to pick things up with her left hand and miss the object, yet think she had it in her hand!

My mother eventually fully recovered from both her chronic subdural hematomas.