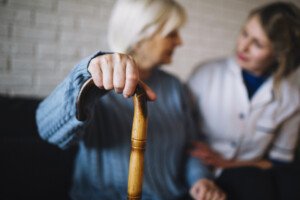 My elderly mother’s doctor didn’t warn her that she could get a chronic subdural hematoma even though her head CT scan was normal.

Elderly age plus head trauma = fair chance of developing a chronic subdural hematoma, and this chance jumps when the elderly individual is on the blood thinner Coumadin at the time of their fall.

It has long been recognized that elderly individuals are more likely to develop a subdural hematoma (brain bleed), particularly from minor trauma.

“As we age our vessels age with us,” says Reena Patel, MD, a board certified family medicine physician who treats patients at Garnet Health Urgent Care in NY.

“Our capillaries, arteries and veins harden — some more than others, depending on history of hypertension, hyperlipidemia and overall health/genetics.

“Some may even experience decrease in overall brain size. This makes it easier for vascular injury.

“A small vessel in the brain can have a break, leak or tear that over time can cause a deep impact.”

When aging causes the brain to shrink, this increases the amount of space between it and the skull from 6% to 11% of the total intracranial space. The bridging veins then stretch.

The brain can move more due to the increased space, and this makes these veins more vulnerable to tearing from getting hit in the head or hitting the head from a fall.

Every elderly patient who has a normal CT scan following a fall or other hit to the head should be warned to be on the lookout for future symptoms.

“Symptoms of a slow brain bleed can include: headache (most common), neurological deficits such as weakness in a limb, balance issues or paresthesias, slurring of speech and confusion, to mention a few,” says Dr. Patel.

My elderly mother had a normal CT scan, and then another one 24 hours after that, following a fall and visible injury to her head.

I asked the ER doctor, “What about the chance that a few months down the road, there’s bleeding in her brain?”

The doctor said, “There’s a very slim chance of that.”

Six weeks later my mother awakened with a searing headache and significant lower body weakness, out of the blue.

A CT scan later in the day showed a chronic subdural hematoma.

At the time of her fall, she still had Coumadin in her system (she’d gone off it the day prior).

The original ER doctor had actually known she was on Coumadin.

This doctor never told my elderly mother about the blaring risk factors for a chronic subdural hematoma: hit on head (it’d even been bloodied), elderly age and Coumadin!

Several years later my father had an apparent blackout while standing and fell face down.

He was on Coumadin. The fall resulted in a “goose egg” purple and red swelling on his forehead.

Nobody at the ER informed him that there’s a fair chance that a few weeks or months down the road, he may develop symptoms from a chronic subdural hematoma.

Of course, I then knew this already, and was vigilently on the lookout for neurological symptoms in the ensuing weeks.

“The CT scan is normal,” was all my parents got.

Because elderly patients may not get a warning about chronic subdural hematoma, they and their family often don’t have a clue what’s going on weeks or up to three months later when the neurological symptoms start developing.

The symptoms of these brain bleeds can mimic dementia, stroke and mini-stroke.

If you’re elderly (or know someone who is) and have recently hit your head, and the CT scan was normal, even one 24 hours later — consider the next few months as an incubation or grace period for the development of a chronic subdural hematoma.

In addition to treating many chronic conditions, Dr. Patel treats urgent conditions that affect every part of the body. Instagram: That_dr_next_door