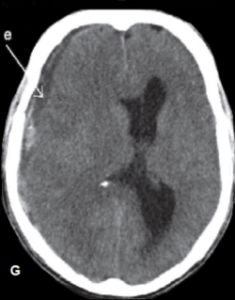 Seemed the neurosurgeon was wrong and the layperson was right about recurrence of chronic subdural hematoma.

A neurosurgeon didn’t think my mother’s new symptoms were the result of a recurring chronic subdural hematoma.

My mother awakened one morning in 2011 with neurological symptoms.

Later that day a CT scan showed bleeding in her brain: a chronic subdural hematoma. The next morning it was surgically drained via burr hole.

The neurosurgeon said there was a 15 percent chance of recurrence. A study by Byung-Soo Ko et al says the recurrence rate is 3.7 to 30 percent (after burr hole drainage).

For another article I wrote regarding chronic subdural hematoma and recurrence, I interviewed Kangmin Daniel Lee, MD, a neurosurgeon with North Jersey Brain & Spine Center.

I asked him about the typical time passage between a primary cSDH and its recurrence (re-bleeding at the surgical drain site).

Dr. Lee explains in that article: “There is some variability with this number depending on the technique, but most recurrences, when it does occur, will happen in the short term. Most published reports range it from the 1-3 week period.”

Around 10 days after my mother’s initial draining, she began exhibiting suspicious symptoms.

For example, she began dropping things. She also could not (with eyes open) join the ends together of two paper cups after bringing them towards each other with outstretched arms.

She also couldn’t join her hands in a clap position from an outstretched position.

Believing a recurrence of the chronic subdural hematoma, I reported these deficits to the neurosurgeon. He doubted a rebleed.

I gave my mother more tests, including picking a straw up from a table with her left hand.

She’d attempt to grab the straw but miss it. She’d pull her pants up after using the toilet, but only on the right side, unaware that the left side (including underwear) was still down as she walked away from the bathroom.

My mother was also experiencing escalating headaches. A follow-up CT scan (to the initial burr hole draining) had already been scheduled (and was still several days out).

On Jan. 23, four days prior to a follow-up appointment in his office, I again spoke to the neurosurgeon.

He insisted that there was no recurrence of the chronic subdural hematoma. He then said that sometimes the elderly get weakness in an arm.

Since when is literally grasping for straws and missing them a sign of muscle weakness?

And what about the other symptoms, such as unawareness that her underpants and pants were not pulled up on the left side?

This sure sounded like a recurrence of a chronic subdural hematoma rather than age-related weakness.

I had also described to him the inability to join the paper cups or her hands. I also pointed out that these symptoms were of a relatively sudden onset (several days). The neurosurgeon said, “If you’re concerned, take her to ER.”

He said that headaches normally don’t occur post-drainage procedure, but offered nothing else at that point other than to take her to the ER if she “deteriorates rapidly,” but otherwise, to keep things on schedule.

Results of that follow-up CT scan: The neurosurgeon’s colleague called me and said that the neurosurgeon said there was “nothing significant,” no “significant” mass, and the midline shift appeared normal or unchanged.

I managed to get the follow-up office appointment moved from Jan. 27 to Jan. 26.

Then the neurosurgeon’s physician’s assistant contacted me that the CT scan was “worse” but also “improved” in that the volume of fluid was greater, but density less. There was no new bleeding, however.

According to a report in Advances in Neurosciences and Clinical Rehabilitation, a CT scan can “miss” a chronic subdural hematoma (depending on type) that an MRI can easily show.

This makes me wonder why an MRI was never ordered for my mother.

The neurosurgeon finally confirmed that the increased fluid volume was causing the excruciating headaches and impaired left hand.

When I referred to the left hand malfunction as “significant,” the neurosurgeon promptly corrected me by saying it was mild or not significant, compared to what he sees in other patients, and that “significant” was total paralysis.

I had to bite my tongue hard to keep from criticizing his blasé attitude and inappropriate reference to “other patients.”

After all, I didn’t want to lose brownie points with a doctor who was probably going to be draining my mother’s brain again.

He offered my mother a choice between a Medrol Pak (oral steroids) or a second burr hole draining.

After the procedure the neurosurgeon told me that there was a “new bleed.” I wondered if this “new bleed” was actually a recurrence of the original chronic subdural hematoma. I’ll never know.

What a coincidence that a “new bleed” popped up within that one to three week period following the burr hole draining of the first chronic subdural hematoma.

I have never doubted the meaning of that old adage, “Eighty percent of medicine is common sense.”