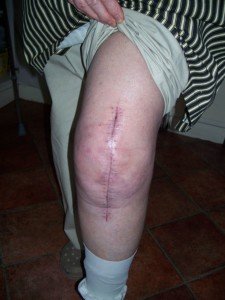 Have you had knee replacement surgery, and have noticed that the other leg seems to be getting bigger or swollen in appearance, even though after the first several days following the operation, it looked as it always had?

One of the leading risk factors for a deep vein thrombosis is knee replacement surgery, says Mayoclinic.com in the site’s DVT section.

If you’re familiar with deep vein thrombosis, you already know that a classic sign is swelling of the leg  —  a key symptom noted by Mayoclinic.com.

The site says that knee replacement surgery can cause a DVT because of debris that forms during the procedure that can get into the venous system.

Another cause is general anesthesia in combination with post-surgical immobility.

My father had knee replacement (revision) surgery. Five days after the surgery, I thought I began noticing that his non-surgical leg was a tad smoother than it usually looks, especially around the ankle, but I thought it was my imagination.

I’d been watching the non-surgical leg like a hawk since the surgery, so I knew exactly what it was supposed to look like.

Five days after the knee surgery, I took him to the ER upon the advice of his surgeon when the physical therapist suspected an infection.

I asked the nurse and the ER doctor if the non-surgical leg “looked fine,” and they both said it did, even though, by golly, I couldn’t help wonder if I wasn’t imagining things as I studied the leg from behind while my father shuffled with his walker.

The day before this, he had stopped wearing the “anti-emboli” ted hose.

Next day, there was no doubt; the leg was swollen, including the foot and toes.

Even my father admitted it. I was thinking, a DVT has formed because he removed the ted hose the other day.

His primary care doctor wasn’t at all concerned and said it was edema from excessive inactivity. Why did this not occur sooner; why five days later?

Most likely because he’d been wearing the ted hose continuously up till a few days prior.

Once he removed them, the edema (excess fluid in a limb) had a chance to build up. The ted hose (a.k.a. compression stockings) prevented this.

“Half of all DVT cases cause no symptoms,” says WebMd.com. Don’t be led astray by a doctor who makes it seem as though you can’t possibly have a deep vein thrombosis just because there’s no pain or redness with your leg swelling.

WebMD.com lists the following as DVT symptoms: swelling in the leg; tenderness or pain in the leg (may occur only when standing or walking); excessive warmth in the leg; red or discolored skin in the area; visible veins; undue fatigue.

If your non-surgical leg is swelling after knee replacement surgery (even if there’s no pain or redness), or the surgical one is swelling more and more, especially if initially the swelling was going down, get medical attention promptly.

Don’t assume it’s just edema from inactivity. Let a doctor tell you that.