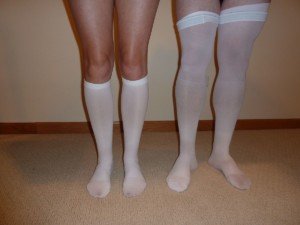 My father has had, in total, four joint replacement surgeries — a big risk factor for DVT development.

In his case, the perspective on TED hose for helping prevent a deep vein thrombosis varied from surgeon to surgeon, nurse to nurse.

Gee, I wondered, is TED hose very effective or not?

Why did some medical professionals take this tool very seriously, and others weren’t too attentive to it or didn’t seem to put a lot of stock in it?

I also observed mixed perspectives on TED hose regarding my mother’s illnesses that rendered her to a lot of bed rest.

“Mechanical prophylaxis has not been studied as extensively as chemical prophylaxis in the prevention of DVT,” says Kevin Casey, MD, FACS, a vascular surgeon with West Coast Vascular.

“However, they may be the only treatment option for those patients in whom chemical prophylaxis is contraindicated,” says Dr. Casey.

“In addition, many of the studies combine both, rather than examine solely, the graduated compression stockings (e.g., TED hose).  This may be why there is some confusion on the matter.

“Graduated compression stockings are effective in DVT prevention.  The most notable recent study was a meta-analysis of seven randomized controlled trials which showed a cumulative post-operative DVT reduction, from 29% in the control group to 15% in the compression group.”

In addition to the TED hose…

“I am an equally strong advocate of intermittent pneumatic compression while my patients are in the hospital,” Dr. Casey explains.

“These have also been shown to have an extremely successful reduction in the incidence of DVTs in post-operative patients.

“Unlike stockings, they have a decreased risk of skin breakdown and irritation.  Of course, they cannot be used at home.”

Warning: Make sure the nurse or nurse assistant turns back on the IPC device after accompanying the patient to the restroom or taking the patient out into the hall for some walking exercise!

More than once, I noticed that the IPC device was NOT on after my father or mother was returned to their bed!

“The DVT risk does extend beyond the post-operative period,” says Dr. Casey.

“Of course, once the patient leaves the hospital, all doctors encourage them to ambulate as much as possible, certainly at least three times per day.  Ambulation is very important in the prevention of DVT.”

My father was instructed to wear the TED hose overnight for several weeks after he got home from his first knee replacement surgery.

For the third surgery, he was told he didn’t have to wear them once he got home!