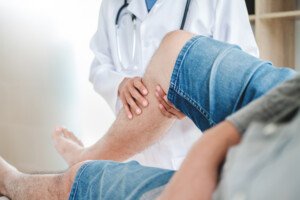 A doctor points out many possible causes (some very serious!) of swelling, pain and redness in just one calf.

If a calf is swollen, red and painful (hurts, aches, or feels crampy), especially if there’s no explanation such as a traumatic injury or snake bite, this could mean a deep vein thrombosis (DVT).

This is actually the first thing an ER doctor will suspect if someone with these symptoms is seen in the emergency room.

An ultrasound will be ordered to check for a DVT, but there are times when a DVT is missed.

Making things even trickier is that “a large portion of patients with an acute DVT don’t present with unilateral calf swelling, pain and redness,” says Kevin Casey, MD, FACS, a vascular surgeon with West Coast Vascular.

Swelling, Pain and Redness in a Calf not the Only Symptoms of DVT

“Clinical manifestations are variable,” says Dr. Casey, “and range from absence of symptoms to massive pitting edema and blanching (a condition called phlegmasia cerulea dolens which is a surgical emergency with a high risk for limb loss).”

Pitting means that if you press on the swollen area with a fingertip or, say, eraser-tip of a pencil, it will leave an obvious indentation that will take longer than five seconds (sometimes up to a few minutes) to vanish.

Dorsiflexion is the ankle joint motion of flexing the foot upward.  “Up to 50% of patients with DVT, however, may lack any specific signs or symptoms.”

What else can swelling, pain and redness in one calf mean?

You’ll likely have a memory of an extraneous insult for at least a few of these issues, such as muscle strain or tear, and stress fracture.

If you have kidney, liver or heart failure, you’ll very likely have other troubling symptoms of these conditions. Blood tests can reveal presence of disease in these organs.

Pain, redness and swelling, especially in one calf, warrants immediate evaluation by a doctor!