DVT and Chronic Subdural Hematoma at the Same Time? 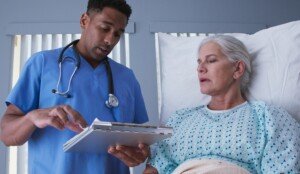 How would a patient with both deep vein thrombosis and chronic subdural hematoma be treated?

Now, I don’t mean someone who develops a chronic subdural hematoma from the Coumadin (Warfarin) they were prescribed to treat a DVT.

Rather, I mean a new-onset DVT which is unrelated to the symptomatic chronic subdural hematoma. The patient has risk factors for DVT, such as smoking, lack of exercise and recent prolonged air travel.

The chronic subdural hematoma developed as a result of slipping on ice several weeks prior and hitting the head against concrete.

“This patient would likely be a good candidate for an (inferior vena cava) IVC filter. This is a small ‘umbrella’-like device which is placed in the IVC.”

The filter “does not prevent the development or propagation of DVTs, but it prevents them from traveling to the lungs and becoming a PE.”

Think of a fish net trapping fish.The IVC is a large vein that leads into the heart.

My mother had a DVT and a chronic subdural hematoma—about two and a half months apart, but they could have been concurrent, when I think about it…

What about pulmonary embolism simultaneous with chronic subdural hematoma?

As for course of treatment, Dr. Casey explains: “Again, we would have to have a very close discussion about the best options for this patient. However, I think that an IVC filter may also serve this patient best.”

The IVC filter would prevent any additional PEs, but would not dissolve the PE that’s already there.