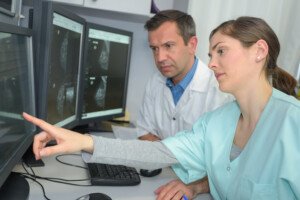 How is a patient treated if presenting simultaneously with an acute subdural hematoma AND a massive pulmonary embolism?

Can anything be more vexing?

For example, a patient arrives at the emergency room from a motor vehicle accident, with a suspected acute subdural hematoma, but is also showing signs of a massive pulmonary embolism.

For all we know, the patient had recent knee replacement surgery; or is a smoker on birth control pills; or is obese who very recently ended a long airplane flight—all risk factors for a DVT—which can break apart and lead to a pulmonary embolism.

An acute (not chronic) subdural hematoma is a life-threatening situation that requires immediate surgical intervention.

A massive pulmonary embolism also is life-threatening and must be treated immediately. Both conditions are confirmed with a CAT scan.

Give a blood thinner to a person whose brain is bleeding from an acute subdural hematoma, and this will intensify the hemorrhaging.

But if the acute subdural hematoma is treated before the pulmonary embolism is, the PE could kill the patient while the craniectomy is being performed.

What a Vascular Surgeon Says

“These always have to be looked at on a case by case basis, so it is impossible to say what I would do, but the issues would be this: relieving the SDH and restoration of blood flow to the pulmonary artery which is causing the hemodynamic instability.

“If pressors alone were not alleviating this, then the possibility of mechanical thrombolysis (removing the clot from either an endovascular or open surgical technique without the use of systemic anticoagulation) exists and may be the best option.”

But which doctor (neurosurgeon or vascular surgeon/interventional radiologist) should “go first”?

“It is unlikely that a neurosurgeon would be doing a craniotomy (relieving the bleed in the skull) while anyone else would be doing an angiogram or sternotomy (cracking the chest) at the exact same time.”

A massive pulmonary embolism can require cracking of the chest for access to the lungs.

“Perhaps it has been described in the literature, but it is not common and I’ve never seen or been a part of that combined approach,” says Dr. Casey

Simultaneous pulmonary embolism and acute subdural hematoma would be nothing less than agonizing for doctors to be faced with.