Can Chronic Subdural Hematoma with Symptoms Go Away on Its Own? 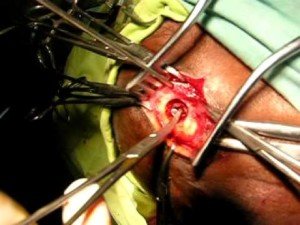 If a chronic subdural hematoma causes symptoms, does this mean it cannot resolve on its own, without medical treatment?

After all, many elderly people (and younger people who get hit in the head), who don’t have medical coverage, and who develop chronic subdural hematoma, won’t seek medical attention if the symptoms are mild.

Also, in an elderly person, if the symptoms are mild enough, they can be brushed off as a sign of aging, or the result of “working too hard” the day before.

In fact, when my mother awakened with a searing headache (and was later diagnosed with chronic subdural hematoma), my father actually believed that the headache was caused by eye strain from sewing too much the day before!

“It is possible for cSDH to resolve on its own,” says Kangmin Daniel Lee, MD, a neurosurgeon with New Jersey Brain and Spine. (He was not my mother’s surgeon.)

But this refers to chronic subdural hematoma without symptoms.

If a chronic subdural hematoma doesn’t produce symptoms, then how would doctors even know a patient has one in the first place?

It is discovered incidentally on a CAT scan of the head that’s taken for either an unrelated reason; or, a tiny chronic subdural hematoma is discovered in addition to the bigger one that’s causing some symptoms. This was the case with my mother.

She had a CAT scan with contrast dye of her head because the ER doctor suspected a mild stroke.

But then the ER doctor came back and stated, “You didn’t have a stroke. But what we found surprised us. You have bleeding in the brain. Did you fall recently?”

(The fall had been six weeks prior, in which she’d hit her head on the bathtub.)

There were two chronic subdural hematomas in my mother’s brain. One was “large” and the other was “small,” at just four millimeters.

Only the large one was surgically drained (via a 15 minute procedure). We were told that the small one would resolve on its own.

It never produced symptoms (after the surgery my mother didn’t exhibit the profound weakness in her legs that she had that got her the ER visit in the first place).

So yes, a chronic subdural hematoma without symptoms can resolve on its own.

Dr. Lee says, “This will take weeks to months depending on the volume of blood present.

“However, if the patient is symptomatic from the hematoma, then this usually will indicate that the volume of blood has gotten thick enough to cause mass effect on the brain.”

The term “hematoma” is derived from Latin and translates to “blood mass.”

Dr. Lee continues, “If the volume is large enough to do this, then the likelihood is greater that there will be repeat hemorrhages, causing even more mass effect, which would be dangerous for the patient.

“This is because the hematoma actually pushes the brain away from the skull, stretching the tiny bridging veins and increasing the likelihood of further hemorrhage.

“If the vein bleeds then there is often a snowballing effect making things worse and worse.”

Corresponding to this is an increase in the space between the brain and skull from 6 to 11 percent of the total intracranial space.

These conditions increase the likelihood of chronic subdural hematoma from a fall in the elderly.

A chronic subdural hematoma typically shows symptoms weeks after the trauma to the head, when head trauma is the cause.

In fact, a CT scan taken 24 hours after getting hit in the head may be perfectly normal.

And then weeks go by without any problem, but then one day the patient awakens with symptoms: a chronic subdural hematoma is at work.