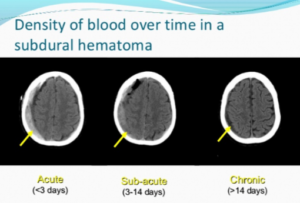 You may need to really be on the ball to catch the early symptoms or signs of a recurring chronic subdural hematoma.

These new-onset symptoms won’t necessarily be the same as the original ones. The recurrence rate is 5 to 33%.

“A chronic subdural hematoma occurs when blood collects on the surface of the brain beneath the dura, which is the covering of the brain,” says Dr. David Beatty, MD, a retired general practitioner with 30+ years of experience and an instructor of general medicine for 20 years.

“Rupture of cortical bridging veins occurs. These veins connect the venous system of the brain to the intra-dural venous sinus.

“Sometimes there is a history of head trauma, but this is often only a minor knock which may have happened days or weeks earlier.

“In about 50% there is no recollection of head injury.”

Six weeks prior to the first symptom of my mother’s cSDH, she had lost consciousness due to orthostatic hypotension, fell and hit her head on a bathtub. At the time she was on Coumadin, a blood thinner.

She stopped the Coumadin 12 days later due to the fall risk of orthostatic hypotension, but continued on daily aspirin for recent coronary bypass surgery.

Thus, the neurosurgeon (after cSDH diagnosis) was not able to pin down the cause of the chronic subdural hematoma.

Six Weeks After the Fall

One morning she awakened around 7 am with a splitting headache that made her weep and unable to function. It persisted for three hours until painkillers finally subdued it.

Her walking was very feeble, and she also upchucked.

With difficulty she made her way down the stairs and sat in a chair, reporting that the headache was gone. But she had extreme difficulty rising from the chair.

She was not able to walk normally; was weak and very tired. Her left leg slightly dragged behind the right.

All these symptoms suggested a mild stroke, but at the ER she was diagnosed with chronic subdural hematoma.

Ten days after a burr hole craniotomy was the first time that a definitive new symptom appeared, though at the time, I didn’t think this was a recurrence of the chronic subdural hematoma.

About nine or ten days after the burr hole procedure, I noticed that my mother seemed marginally foggy, but chalked it up to just overall general recovery, and a very recent adverse reaction to an anti-seizure drug, Keppra, that was prescribed for the chronic subdural hematoma.

She had been regaining her strength after the adverse drug reaction, but then seemed to be regressing as far as energy.

Since the surgery my mother had complained of headaches, but they weren’t bad enough to alarm me; I thought they were post-surgical, or related to the incision.

But ten days after surgery I began noticing some quirky mental things.

Then she began dropping things by accident. Ultimately it was determined that the dropping was coming from her left hand.

She was not able to touch her left index finger to her nose with eyes closed. That’s when I knew there had to be a recurrence of the chronic subdural hematoma.

Also, over the past several days her headaches had increased in frequency and intensity, to the point where she’d moan and groan.

I got ahold of the neurosurgeon and reported loss of fine motor control in my mother’s left hand.

She struggled to pick up a straw, dropped cups of juice and a bowl of potato chips, dropped her glasses and accidentally stepped on them and didn’t realize it, and dropped other items like a roll of masking tape, the TV remote and some mail.

The neurosurgeon wasn’t concerned and never suggested this might be a recurrence of the chronic subdural hematoma!

One mental incident stood out. She had a few pills in her left hand, about to take them, then suddenly went to a chair and lifted a magazine off it with her right hand, then placed the magazine back down, pills still in left hand. I asked why she did that.

She said, “I’m looking for my pills.” Then she realized they were in her left hand.

Overnight she was awake most of the time, loudly groaning from headache pain.

At 7 am she was stuttering, speech mildly slurred, or, to put another way, lacking its usual crystal clarity, and her mentation was altered (e.g., kept insisting, and trying, to go upstairs to sleep despite having to get ready for an appointment with the neurosurgeon).

We were running behind schedule, yet she insisted on using her impaired left hand to lift a glass bottle of juice from the top shelf of the refrigerator. I had to remove the bottle from her flaccid hand.

She then wanted to make up her face, despite my protests that we were going to be late, and she didn’t seem to notice she was repeatedly dropping things in the bathroom.

I finally had to place my hands on her and make her walk into the garage.

Ultimately, she was diagnosed with a recurrence of the chronic subdural hematoma.

As you can see, the symptoms the second time around were different than the first time, save for the headache.