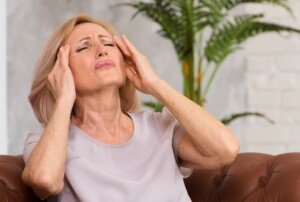 Migraine headache sufferers may be fearful that this condition raises Alzheimer’s disease risk, because migraine headaches are associated with a higher incidence of small lesions within the brain that are picked up by MRI.

Interestingly, according to a study involving 780 people over the age of 65, having repetitive and significant headaches, or migraines, does not increase the risk of this disease.

It is a fact that in people with a migraine headache history, more of these people, when compared to the general population, have lesions in the microvessels of their brains.

However, such lesions are a universal finding in the elderly population.

The severity, though, varies quite a bit from one person to the next, and they are more severe among people with a history of migraine headaches.

Do you suffer from headaches?

“As an Alzheimer’s specialist, I can say that I have never seen any relationship between headaches or head pain and the development of Alzheimer’s,” says Dr. Robert Williams, MD is a family medicine doctor and geriatrician in Lakewood, Colorado and is a medical advisor for eMediHealth.

Dr. Williams explains, “One should be more concerned about a sedentary lifestyle, smoking, obesity and social seclusion.

“One type of dementia is specifically due to having multiple small strokes over a lifetime which is typically due to poorly controlled cardiovascular disease.”

Lower  the Risk of Alzheimer’s

Based in Lakewood, CO, Dr. Williams has been in practice for over 12 years. In addition to Alzheimer’s disease, Dr. Williams’ areas of expertise include neurology, pulmonology and autoimmune disease.