How Very Tall Women Can Fight Back at Rude Height Comments 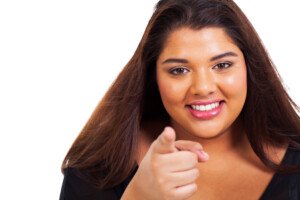 Many very tall women report that all their lives, they’ve gotten rude or less-than-complimentary comments and questions about their height.

Other very tall women have never experienced this problem, and some of them may even find it difficult to believe that this problem exists.

But for some very tall women, it does. Maybe it’s because sometimes, people just happen to end up being around too many small-minded schmucks who lack social graces.

There was a website several years ago where tall women posted their experiences, and most of the posts were quite negative.

These posts cited quite an array of nasty mean comments from strangers, as well as from coworkers, social contacts and even family members.

Here is one such post, copy and pasted off the site. The post was written by 6-1 “Val.”

I’m criticized for wearing heals, called anorexic (I’m fairly thin) and I’m quite often mistaken for a guy. I have broad shoulders and I’m flat everywhere so I get many comments about my manliness xD

Val needs to re-evaluate her choice of whom she hangs with and where. She seems to gravitate towards negative pockets of people. Maybe she and those like her grew up in negative households.

It’s amazing how rude and callous people can be!

Very tall women who keep getting fed rude, unkind remarks about their height need to get away from these small-minded people. Dump them like garbage.

Of course, if some of this toxicity is coming from family members, it won’t be so easy to toss them out the window.

But make an effort to limit contact with them.

It’s unbelievable that very tall women or even “average tall” women can actually be challenged or even criticized for wearing high heels — by strangers.

I can easily picture these rude people doling out criticisms to shorter women about other features such as hairstyle, dress and who knows what else.

Do you really, really wish to continue associating with people who keep trying to pull you down into their hole? Rid them.

But there’s another way that very tall women can fight back at little-minded people who dare to make unkind comments and criticisms: Wear the doggone five-inch heels and stare them down.