Can ALS Be Diagnosed with an EMG Test Alone? 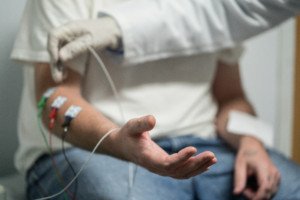 Are  you suffering from the agony of thinking you might have ALS, but have not had an EMG test?

When a doctor suspects that a patient might have ALS, the patient is told they should have an EMG done.

Many people who experience symptoms that make them think of amyotrophic lateral sclerosis wonder just how soon an EMG can detect this ruthless disease.

Another name for this test is the electromyograph.

So how soon can an EMG detect ALS?

“If a patient has symptoms from ALS, then a proper EMG will be able to detect abnormalities,” says Michael Cartwright, MD, a board certified neurologist at Wake Forest Baptist Medical Center in Winston Salem, NC.

“However, this requires that the correct muscles be tested and the EMG be performed by a physician with experience assessing for ALS.”

Some neurologists specialize in EMG testing.

What many people do not know is that this fatal neurological disorder is a clinical diagnosis.

This means that the physician makes the diagnosis based on what he or she observes in the clinical setting with the patient.

Dr. Cartwright explains, “An EMG is used to exclude other diseases, and there are certain patterns of EMG change seen with ALS. But EMG alone does not make the diagnosis of ALS.”

Wow, this could explain why so many patients fear that they were misdiagnosed with BFS (benign fasciculation syndrome) — believing they actually have amyotrophic lateral sclerosis.

So though the EMG is an important tool…it unfortunately isn’t definitive enough to reveal that a patient definitely has ALS.

As a matter of fact, the site for Massachusetts General Hospital Neurology states:

“The EMG may not clearly identify a problem early on in the disease. Sometimes, it must be repeated at a later time.”