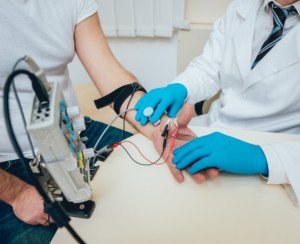 Can electromyography be done too early to detect amyotrophic lateral sclerosis?

People fearful they have ALS may wonder if their EMG test missed it because it was done too early; the EMG test results came out normal, but then, you still think you have ALS and begin doubting the EMG’s accuracy in detecting this fatal neurological disease.

Every 90 minutes in America, someone is diagnosed with amyotrophic lateral sclerosis, and death typically occurs 2-5 years after diagnosis, usually due to respiratory failure.

To find out if an EMG test can be done too early to diagnose ALS and thus miss it, I posed this question to Daniel Kantor, MD, director of the Neurology Residency Program, Florida Atlantic University.

Dr. Kantor responded: “There are two questions here. Can an EMG be normal in a patient who eventually gets diagnosed with ALS, and can an early abnormal EMG in an ALS patient be misinterpreted as another disease process. The answer to both, is, unfortunately, yes.”

The first of these two questions mentioned above simply means that you can go in for an EMG test that turns out normal — because you don’t have ALS.

But by sheer coincidence, at some point down the road, you happen to develop this untreatable neurological disorder, and sooner or later you’ll be going in for a second electromyography, due to the new symptoms.

This is akin to a woman going in for a mammogram that doesn’t detect breast cancer – because she doesn’t have it. But five years later, a mammogram shows a suspicious mass.

The second question is that a person with ALS has an EMG, and the results are misinterpreted for another condition. But the scenario doesn’t end here.

Dr. Kantor adds: “A person with ALS may have a normal EMG years before they become symptomatic, so theoretically an EMG early in the course of their ALS may appear normal (or mostly normal).”

So I then asked Dr. Kantor: What if they have the electromyography at the time they actually start having early symptoms?

Assume that’s why they’d have the test in the first place; they’re having peculiar symptoms; at this point, then, could the EMG still “miss” the ALS and still show normal readings?

Dr. Kantor says, “Actually, no test is 100 percent, even x-rays. So, theoretically (but not likely), an EMG could fail to detect the typical ALS changes because the electrical signals are below the sensitivity of the machine.

Other problems may cause an EMG picture similar to ALS, and ALS may be misdiagnosed as another problem.

Also, please remember that an EMG, like any test, is not 100 percent and is very operator dependent.”