Does Vomiting After Coronary Bypass Mean Something Serious? 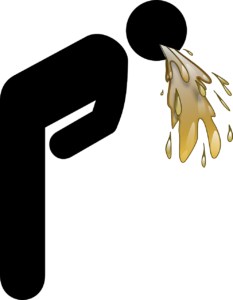 If a person vomits after coronary bypass surgery (CABG), is this significant?

One must also consider how long after the coronary bypass surgery that the patient began vomiting.

Has the vomiting been ongoing since immediately following the CABG?

Or did the vomiting start up several days, or a week or so, after the coronary bypass surgery?

“Vomiting is poorly understood since it not only is caused by direct irritants to the stomach, but also by certain smells, tastes, sights, and even by motion,” says Dr. Michael Fiocco, Chief of Open Heart Surgery at Union Memorial Hospital in Baltimore, Maryland, one of the nation’s top 50 heart hospitals.

“After CABG, vomiting is usually a sign of poor gastric (stomach) motility.

“This is more prevalent in diabetics who are notorious for having poor gastric emptying.”

Diabetes is a major risk factor for coronary artery disease. But many coronary bypass patients are not diabetic.

Dr. Fiocco continues, “Other causes include medication irritating the stomach and severe constipation.

“For patients in the hospital, you may be faced with three or four morning medications plus pain medication before being served breakfast.

“Insist on something to eat first, or nausea and possibly vomiting will be the result.

“No matter the cause, vomiting after CABG is not common and usually self-limiting.”

My mother had some bouts of vomiting after her quintuple bypass surgery.

It began in the hospital after she was moved to the cardiac recovery wing, and it was soon realized by staff that the vomiting was associated with a vaso-vagal response (orthostatic hypotension), which she began experiencing nine days after her coronary bypass surgery.

The orthostatic hypotension has resolved, but to this day, it has not been determined what the cause was.

The three suspects are:

2) Pacemaker syndrome (the first orthostatic episode occurred the morning after my mother had a pacemaker implanted … nine days after the CABG), or

3) Side effect from the anti-arrhythmic drug amiodarone (within a day and a half of my mother stopping this drug, the orthostatic hypotension began decreasing until it disappeared).

My mother had occasional miscellaneous bouts of vomiting in the weeks following the coronary bypass surgery, that were not related to orthostatic hypotension.

Most of this vomiting occurred while she was struggling with constipation on the toilet (at home).

Another instance of at-home vomiting apparently was related to the emotional turmoil caused by the coronary bypass surgery.

Immediately following coronary bypass surgery, a patient may vomit as a result of the general anesthesia.