Walking Backwards on a Treadmill While Leaning into the Bar 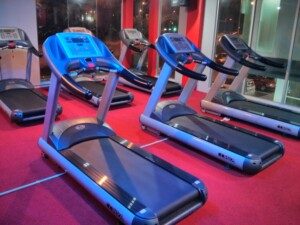 People think they get a novel workout by walking backwards on a treadmill while leaning their back into the front bar! This is worthless and here’s why.

Every so often I see someone walking backwards on a treadmill – and almost always, their hands are on the side rails – which defeats the purpose as well as skewers their posture.

I finally saw something that was absolutely nuts: A man was walking backwards on a treadmill while leaning his back against the front bar.

For most of the duration, he had one hand or the other on a side rail.

Just what was he hoping to accomplish? He must’ve thought that walking backwards was giving his legs a unique form of exercise. Otherwise, why would he’ve done it?

Because his back was leaning – yes, leaning – into the front bar, this caused his upper body to slouch somewhat.

It also caused his legs to be sticking more forward and more bent than if he were not leaning on anything.

Leaning one’s back into the bar on a treadmill while walking backwards does NOT make the ambulation more challenging.

It makes it a LOT easier.

The man could pass for college age and was slender in build. This is important to know in case any readers are supposing that he had a disability.

I was on his right side, and on his other side was a woman who could pass for 55 to 65.

The irony was that she’s the one who seemed to have a problem with ambulation – yet she was walking without holding onto the treadmill.

Her gait was stiff and tentative, and her steps were very small, while she moved at a slow speed.

And all the while, her hands were free.

Then she began trotting – very slowly, very small steps – and still without holding on.

Yet this man next to me, perhaps 20 or 22, felt he had to lean against the machine and keep a hand on a side rail while walking backwards.

Eventually he turned forward and guess what: He took to jogging – without holding on.

You’re probably wondering, “Hey, since he was jogging without holding on, which means he was getting an effective workout, what difference does it make if he was leaning into the bar and holding onto a side rail while walking backwards?”

Great question! And here’s the answer. Just because he ultimately did an efficient workout doesn’t mean it was worthwhile to do an inefficient segment prior to that.

He believed he was doing his body good while fake-walking backwards. But he was mistaken.

When people spend time at a gym, they want to do something that will bring results. They don’t want it to be a waste of time.

Why bother doing something, then, that’s fruitless?

I’m sure that young man wanted to achieve something by walking backwards. But he wasted his time.

You may be wondering why this is my business. Well, I’m a former personal trainer and was a stickler for instilling excellent form in my clients.

I’ve always had a passion for fitness and exercise, so naturally, I’m very tuned into proper form.

Incorrect form, at the least, will be a waste of time, while at the worst, can result in serious injury.

For example, I saw a man of senior age – who didn’t exactly look like he could win a gold medal at the Senior Olympics – squatting with a 95 pound barbell across his back.

Actually, he was more like quarter-squatting – which means that the weight was TOO HEAVY.

But what struck me was that every time he lowered, his back tilted to one side so that the barbell was crooked, and his back was also rounded.

He looked very unsteady every time he lowered and went back up, crooked with an always-rounded back.

It gets worse: The “bar-catches” (the support rails that attach to the squat rack equipment for stopping a falling barbell) were TOO LOW.

If his spine had crumbled under the weight, his body would’ve been slammed to the floor by the falling barbell.

The bar-catches are supposed to be high enough so that if you lose control, you could still be upright with your feet on the floor by the time the bar hits the catches.

My point in describing all of this is that, like many fitness professionals and enthusiasts, I can’t help notice poor form – whether it’s potentially dangerous or utterly silly like pressing one’s back into a treadmill while walking backwards.

If you’re going to make an effort to visit a gym and commit to spending some time there, why not make sure that the time is spent by training smart?

Backward Walking on a Treadmill: Take Your Hands Off Rails!

Running Backwards on a Treadmill: Pros and Cons