More Autistic People than You Think Have Good Eye Contact 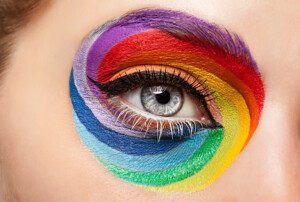 How come my autism came with good eye contact?

Am I an anomaly among the autistic community?

I have a clinical diagnosis of Autism Spectrum Disorder. I have good eye contact.

This means I can easily hold eye contact while doing a lot of nonstop listening to someone looking at my eyes as they talk.

I easily meet the eyes of service providers or people who approach with small-talk.

Though I don’t like accidental eye contact in public (i.e., no premeditated interaction with the stranger), I won’t hesitate to lock my eyes on someone else’s if I need to assert an opinion or feedback.

My eyes do tend to drift away from the listener’s face if I’m the one doing a lot of talking. This is because eye contact while long-talking is distracting.

If you read all the threads about eye contact in autism on Quora, wrongplanet.net and autismforums.com (and there are a TON), you’ll note that most of the autistic people responding have some degree of eye contact struggle.

Remember, autism is a spectrum neurotype.

Nobody knows what percentage of autistic people struggle with eye contact because nobody knows just how many people walking around out there are autistic in the first place.

It’s no secret that women with autism get misdiagnosed with depression, anxiety, (only) ADHD or a personality disorder.

And certainly, there are autistic people who never even consider that they might be on the Spectrum.

If you were to have told me when I was 30 that I was probably autistic, I might’ve thought, “I can’t be autistic; I can stare you down.”

In fact, it was almost accidental that I was ultimately diagnosed, because the propellant behind my seeking an ASD diagnosis was all the content — authored by Autistics — that kept popping up in my feed on a major content site.

I began reading these articles and was astounded over how much they resonated with me.

It’s entirely possible that had I never been on that content site, I would’ve gone to my grave with undiagnosed ASD.

So it’s almost by chance that I decided to get the evaluation.

This illustrates my point perfectly: We have to wonder how many people will die without ever having been evaluated for ASD because they didn’t think they could possibly have it because they had good eye contact.

That could be a LOT of undiagnosed Autists.

If a biomarker for ASD existed, and every newborn was tested with this simple, easy biomarker procedure, I’ll bet that the percentage of ASD in the population would perhaps triple.

It’s estimated to be just over 2% in the U.S. according to the CDC.

But…how many will go to their grave never having been evaluated, or if so, misdiagnosed — which is more prevalent in women?

In fact, I’ve read several comments in threads on autismforums.com in which either an adult was told they didn’t have autism because they were able to look the examiner in the eye, or, their child didn’t have it because the child could look others in the eye!

Gee, if good eye contact rules out ASD, why isn’t this the first step in an evaluation process to save everyone time and money?

Why aren’t the first 15 minutes of an autism evaluation dedicated to eye contact tasks?

That’s because, ultimately, the presence of eye contact can’t rule out ASD.

Though gaze aversion is highly suspicious for ASD, this doesn’t mean that good eye contact rules it out.

If that doesn’t make sense to you, here’s a great analogy: If it’s snowing, it’s cold.

There are other reasons, including sensory overload which interferes with concentration during conversation. Like one Autist said, “I can look or I can listen. Pick one.”

When a person is fearful of another, they actually usually give good eye contact.

This is why rape victims are able to give a sketch artist details about their attacker’s face including eye shape, other eye details like a scar nearby and even eye color.

Victims of other types of violent crimes, such as home invasions, are often able to give detailed descriptions of entire faces.

Fear can make victims stare dead-on into their assailant’s eyes.

It surely stands to reason that the incidence of ASD is way higher than noted, due to either misdiagnoses (“your child was able to meet my eyes”), or the unidentified number of adults who never sought, and will never seek out, an ASD evaluation because they’re convinced they can’t possibly be on the Spectrum because they could look you square in the eyes (and also because they have friends and a sense of humor).

We shouldn’t assume ALL autistic people struggle with eye contact.

I assure you, if you were to attend a social event for autistic adults — as I have done many times now — you’d be getting a lot of eye contact.

However, it’s possible that among those who are giving what appears to be normal eye contact, some are faking it — such as the engaging woman who told me that she was looking at my mouth as we conversed.

She wasn’t timid. She said she looks at mouths to help her follow the conversation.

Others have told me that, indeed, they were giving direct eye contact.

It’s a stereotype that if a neurotypical were seated at a table full of Autistics, the latter would all have their heads down while talking or listening.

A FEW might be doing that, and I mean a FEW. The vast majority, according to my experience with many meetups for autistic adults, will either give direct eye contact or will do a pretty good job of faking it — rather than keeping their eyes overtly down.