New Solid Dark Spot on a Mole: Could this Be Benign? 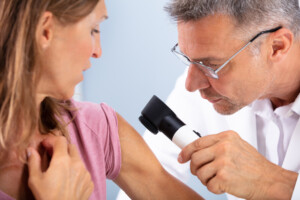 The mole was 3 millimeters and, under magnification had a dark solid spot that was NOT there two years ago.

Everything else about the mole looked the same, but that rather dense spot stood out.

I was scared out of my wits that this was melanoma, especially since a dermatologist had no explanation for it and recommended a prompt biopsy.

For many years I’ve been having serial digital dermascopy: images of my moles taken and put in a computer database for comparison to future pictures.

Moles are viewed, by the dermatologist, over a period of years, with anywhere from one to one and a half years between images. But this time, I let two years go by between imaging sessions.

If a mole is changing, this will be apparent over the images.

The mole in question had appeared stable under magnification for years, as shown below magnified. 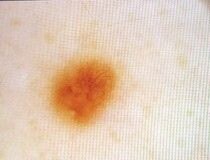 Then suddenly, in the latest picture, there was this spot that was much darker than the rest of the mole.

The time between the latest picture (below) and the one before that (above) is two years. 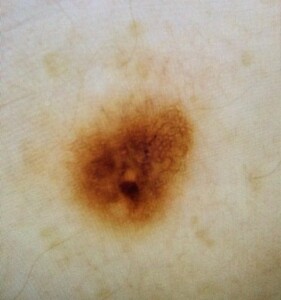 The suspicious area is almost circular and in the 6:00 pm position, in the bottom half of the mole, and is about one-seventh the height of the mole (meaning it’s about 0.43 mm). You’ll note that the overall mole is a few shades darker than in the preceding image, but this is due to a difference in photography.

The dermatologist was concerned and told me to arrange to have my regular dermatologist (through my healthcare plan; the dermascopy was outside the plan) take a biopsy.

The mole was cleansed to see if the dark dot was trapped debris, but it remained, visible under her handheld light-lens.

She also ruled out a miniscule scab (moles can get dark spots from very tiny scab formation resulting from scratching over the area or trauma from clothing).

So, if it wasn’t trapped dirt, and if it wasn’t a scab, then damn, what WAS it? The doctor had no other differential diagnosis and just told me to get the biopsy.

My regular dermatologist was booked, so I had a new dermatologist view it under his handheld lens and he acknowledged the dark spot.

He said that things didn’t look too concerning but thought it was a good idea to get a biopsy.

The mole was removed, and two days later the biopsy came back negative for melanoma.

The biopsy results (“Final Diagnosis”), cut and pasted, are below.

The “Clinical Information” is what the doctor enters into the order as far as suspected diagnosis. It was: Atypical nevus vs. melanoma

This means the physician believed the new dark spot was either an atypical mole (nevus) or melanoma – and could not think of what else it could possibly be.

Now, what vexed me is the “folliculocentric scar.” I asked the dermatologist and he was unable to explain why this had shown up, when it’d been absent in the previous images of the mole.

I then contacted the pathology department and requested to speak to the pathologist who had performed the analysis.

I was told that pathologists do not speak to patients, and that I’d have to rely on my doctor for information.

I explained that I was hitting a dead end with that, and that I needed to speak to the pathologist, as I still had NO explanation for why a mole had an obvious, new dark dot in it.

The dermatologist didn’t know if the dark spot contained a hair follicle, or what area of the mole was the folliculocentric scar part.

Furthermore, if the dark area was a hair follicle, how come this wasn’t visible in past serial images?

The person who took my call said she’d see what she could do as far as getting the pathologist to call me.

Amazingly, the pathologist called me! I asked him please, please explain what in the heck that new dark spot in my mole is; where did it come from? Are you absolutely sure it’s benign?

He called it pigment incontinence. I had never heard of this, despite my strong knowledge of moles and melanoma.

As he spoke (I was in my car when the call came), I jotted down his words. He said:

“Incontinence can sprout up due to irritation or folliculitis.”

I asked why the area looked dense. He said, “It’s just what happens.”

He said scratching could’ve caused it. And yes, from time to time I have an itch on my back. Who doesn’t?

He said that pigment incontinence is “not uncommon.” A mole can “lose pigment into the dermis.”

The dermis is the second layer of skin, below the top later, the epidermis. In pigment incontinence, the mole’s pigment (which is in the top epidermis) leaks into the dermis. This is usually not mentioned in pathology reports.

I asked, “Can I breathe easy?” He said, “Yes. Absolutely nothing to worry about this nevus. It’s completely benign.”

As to why the serial dermascopy dermatologist and the one who took the biopsy didn’t come up with the differential of pigment incontinence is way beyond me.

First chance I got after speaking to the pathologist, I googled all over the place for pigment incontinence.

The information I found (and there’s not much of it) MIRRORED what the pathologist had told me.

New Dark Spot on a Mole

• Can be caused by debris trapped inside the crevasses of a mole. Even if the mole looks smooth, it can have furrows, fissures or depressions that can hold onto dirt.

• Do not pick at the mole in an attempt to remove suspected debris, as this can irritate it and change its appearance.

• Instead, rub with a fingertip moistened with soapy water, making sure your nail doesn’t touch the mole. I’ve done this and it has, on numerous occasions, gotten rid of the “new black speck.”

• Another cause of a new dark spot on a mole is a tiny, tiny scab. These can take a while to totally dissipate.