When Brown Mole Turns Red: Melanoma or Nothing to Worry About? 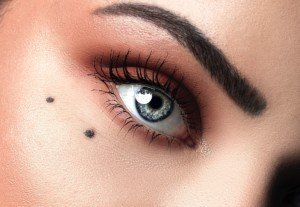 Does a brown mole changing to red necessarily mean melanoma?

How many times have you read that when a mole changes color, this can be a sign of melanoma and to immediately see a doctor?

In fact, for skin cancer screening, we are told to check our ABCDE’s, and the “C” stands for color:

If a mole changes color, not only is this suspicious and should be examined by a doctor, but melanoma can cause a mole to “turn red.”

The year prior I had drawn a mole map of my lower leg so that I could then know what has apparently always been there, as far as moles.

But I never referred back to the map until a year later.

And that’s when I discovered a little dark brown spot that was not on the mole map!

It was on my shin, nearby a prominent mole, so how could I have possibly missed it when I was drawing the map?

The only explanation: It was a new mole!

Normally, moles do not appear in people over 30, though new moles can appear throughout life. However, dermatologists are leery about new moles later in life.

New moles are common in people up to age 30. But past 30, these are to be regarded as suspicious and should be examined by a doctor.

Because I thought the spot on my shin was new, I scheduled an appointment with a doctor. She said it looked benign and I decided to just “watch” it.

I had already lined up an appointment with her prior anyways, which was two months away, for my annual routine skin exam.

I looked at this new spot three times per week for a while, then once every three days.

On a Thursday, it appeared as it always had since I discovered it: a 1-millimeter brown mole.

On Sunday, about 48 days after the doctor had examined it, it appeared a fraction larger, and had a red tinge to it.

I knew I wasn’t imagining the vague increase in size because all along, I had been measuring it up against a file card on which I had drawn two spots with a pencil: one the same size as the mole, and one just a fraction larger.

Now, you might be thinking I’m a hypochondriac, but just weeks before, I had a rapidly changing “mole” removed from my back!

So I was still uptight. The changing mole on my back turned out to be a benign skin barnacle.

I was also positive I was not imagining that the spot on my leg had a new reddish tinge to it.

I had other small spots just like this one on my leg, all the same shade of brown, and when I compared this particular spot to the others, I could clearly see that it just didn’t match anymore in color.

On Monday I made an appointment to have it removed for the following Friday.

So, for five days, I suspected melanoma.

Why ELSE would this mole have developed the reddish cast and gotten a tiny bit larger? 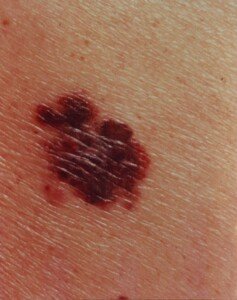 Over the next five days the mole reverted back to its original size, which provided me relief, but it remained reddish brown, though I was positive that come Friday morning, it was less red and more brown; closer to its original brown, but still tinged reddish.

Though the doctor (dermatologist) informed me that the mole was the same size as it was about 53 days prior, when she had first examined it, she then alarmed me by stating, “It looks red.”

So now I knew for sure I wasn’t imagining that the brown mole had turned a bit red.

She removed it with a “shave” procedure, taking with it a small margin of surrounding skin.

When the nurse called with the biopsy results, she said: “It’s a lentigo simplex. That means it’s benign.” She added, “A benign sun spot.” 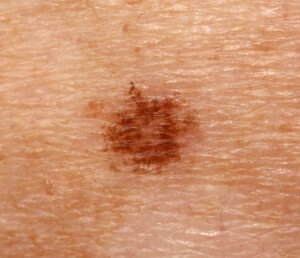 So what had turned this brown “mole” red?

The nurse said that “simplex” is a term used to describe something that had been irritated from being scratched or rubbed.

I had no recollection of scratching or rubbing this area, but then again, it’s not impossible to be unaware of reaching down to scratch one’s leg. It can happen in your sleep.

Nevertheless, the pathology report does not lie: a lentigo simplex.

A lentigo is not a mole, even though the terms are often used interchangeably. A lentigo can look just like a mole, however. 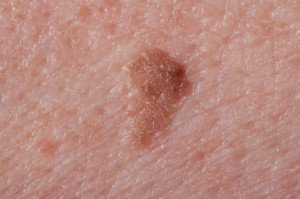 Lentigos can be irregular in shape. Shutterstock/Roblan

And because I had thought the spot was a mole, I referred to it as a “mole” throughout this article.

In conclusion, a brown “mole” that changes to red isn’t always melanoma, but if you notice a brown “mole” turning reddish or red, see a dermatologist, because only a biopsy can rule out melanoma. Melanoma kills around 9,500 Americans yearly.

“If a previously stable mole develops a red color, blue color or new black/brown color, this may be a sign that some of the cells have become atypical, and your dermatologist will most likely perform a biopsy to examine the mole and determine if any atypia is present,” explains Emily de Golian, MD, a board certified dermatologist with Dermatology Consultants, P.C., in Atlanta, GA.

“If a person is uncertain whether a mole has changed or not, the safest option is to have the mole evaluated.”