8 Great Jobs for Autistic Women Based on My Experience 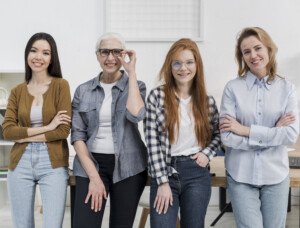 I’m an autistic woman who’s had jobs well-suited for my ASD. If you’re on the autism spectrum you’ll want to strongly consider these jobs!

Autism is a spectrum in that it presents quite differently from one Autist to the next.

This is why I found the job as a cashier not the least bit overwhelming, because I kind of went into Vulcan mode when performing it.

It was the same thing over and over. It was non-taxing and simple, because it was based on repetitive performance and routine. There were no big surprises.

Though I had to “deal with people,” the transactions were brief: People came and went on a quick basis, and there was little room, if any, for small talk, because customers know there are people waiting behind them.

You don’t need the so-called people skills to perform cashier duties. You don’t need a bright cheery smile. Customers, by and large, just want to get through as quickly as possible.

A small percentage will be chatty. But they mostly just want you to listen and nod.

A cashier at a busy place where there’s always customers at checkout is a more ideal job for the autistic woman because this busier environment makes it far less likely that customers will expect small talk or that your boss will expect you to “engage with the customers.”

I have a clinical diagnosis of Autism Spectrum Disorder, confirmed in spring 2022, but was a cashier at 16 at Sears, and at 19 and 21 at two different Kmarts.

In no particular order, the following are jobs that I think would work well for autistic women (and men, for that matter). I’ve had all of these jobs.

Though this job is in less demand due to the Internet, there still exist major city newspapers being delivered to subscribers’ doors.

You work entirely alone from your car. Though you need to collect your papers at the drop-off station, nobody expects you to engage socially.

There were many times when I’d be at the station waiting for the truck to deliver my sack of papers. I’d be sitting at my workstation by myself, daydreaming, and nobody cared.

At the onset you’ll be with a supervisor on the route, but in my case, I think it was on the third day I was good to go on my own.

The negative is that it’s part-time and done overnight – though some autistic people might find this inviting since it’s quiet and there’s minimal traffic.

In a production based job there’s relative tolerance of “weirdness” in employees.

Managers and foremen are only interested in productivity. If you can pump out the work, they don’t care if you’re as strange as a three-headed cat.

In fact, excess socializing can get you called out by a supervisor. I’ve witnessed supervisors telling people to stop talking and get back to work.

If you’re immobilized at your computer for extended periods on a big job (I worked in display advertising production), nobody’s going to wonder why you haven’t spoken a word in two hours.

4     Proofreading at a Workplace

I once had a job in a private office proofreading litigation transcripts. This is a job in which frequently leaving one’s station to socialize is heavily discouraged.

Furthermore, if you have a knack for letters, words, punctuation, etc., this job can be ideal for an autistic woman. You will spot mistakes that might get past NTs.

The caveat is that this kind of job usually requires experience. In my case, I had not had any experience proofreading litigation transcripts.

However, I did have five years of experience proofreading newspaper display advertisements (along with putting those ads together).

If you feel comfortable posing nude for art students, this job can be great for a woman on the autism spectrum.

The types of poses were left up to me. I was told by the art instructor how long to hold poses.

Obviously, you don’t want to strike a yogi pose that you’re told to hold for 30 minutes. But I was also holding poses for as briefly as 30 seconds.

There is zero social interaction for this job. However, if you want to socialize a little, you can do so during breaks.

In my case, I wanted to see how people “drew me.” I wandered from one easel to the next, intrigued by the various interpretations, striking up brief relevant conversations.

For some classes you may be wearing clothes from the costume department, as I had done on several occasions.

The caveat is that this is almost always a part-time position.

I’ve had jobs working with adults who had what was formally known as “mental handicaps.”

One was a part-time job helping adults prepare for employment. Previously, I had done volunteer work in this area for a different social service agency. This was how I got the part-time job.

If any of the “clients” thought I was off, odd, weird, different, etc., this would’ve been more acceptable to them.

If you’re troubled by feeling that you’re the weirdest person in a group, you won’t feel this way if you’re working with a group of people who have, what is now known as, developmental disabilities.

I also had a part-time job working in a group home for adults. The same things apply.

This is a perfect job for an autistic woman who hates the environment of office politics and being around a bunch of typical NTs all day.

Though the vast majority (as I look back with hindsight) of intellectually disabled people I worked around were NT, they were still more tolerant of oddities in anyone who was supervising them, because they had the lived experience of trying to fit in, of being labeled as different or handicapped, of striving to be accepted and included.

You might be thinking, “What?! An autistic personal trainer?!” As a former personal trainer for a large crowded gym, I can honestly state that my Autistry worked to my advantage in some ways.

Yes, there were a few occasions where the director told me that there’d been a complaint that I’d been rude. Yes, some gym members recognized that I was somehow different or blunt.

But I did very well with this job, outperforming NT trainers in selling pricey personal training packages.

This was, in part, because I had a trick up my sleeve: If a potential client seemed extroverted and colorful in personality, this told me they made decisions based on emotion – and that I could tap into them by appealing to their emotions.

Example: “Imagine you’re at your upcoming family get-together and everyone’s telling you how great you look as you walk on by wearing that outfit you haven’t fit into for several years.

“Imagine you’re running about with your kids instead of sitting on the sidelines with fatigue from excess weight.

“Close your eyes right now and picture yourself finally zipping up those jeans without a struggle.”

On the other hand, if the gym member came across as introverted (not autistic), analytical and logic oriented, I appealed to those traits, as follows:

“As your trainer, I will teach you everything you need to know about how to effectively lose weight, improve your health, lower your risk of disease, and keep the weight off permanently.

“With me as your trainer, you will gain tremendous knowledge of exercise so that you know precisely how to achieve your goals, whether they be adding lean muscle mass, speeding up your metabolism, losing stubborn belly fat or regaining lost stamina.

“I will provide you with all the information you need to reach your goals.”

If you come off as odd or atypical, you’ll get away with this as a personal trainer as long as you’re getting clients.

A person who hires you as a personal trainer already has figured out that you’re not quite like everyone else.

This actually had appeal to some of my clients, including an NT who thought I was a hoot – even though I never tried to be funny.

Working from home is a dream for many autistic women and men. If this is your pursuit, DO NOT GIVE UP.

You can start a blog, write for various sites and/or register with Upwork to get freelance jobs.

Also, there are numerous websites that provide new listings daily for freelance writing and editing jobs. A simple googling of this will bring up many results.

Reach out to court reporting firms to proofread deposition transcripts. Start out with charging 0.25 cents per page if you have no experience.

You may snag some novice court reporters who aren’t yet ready to pay higher prices for experienced proofreaders. It’s important to note, though, that even novice reporters want a proofreader with some relevant experience. This can include being an English teacher.

Ideal jobs for autistic women don’t end with these eight suggestions. These are based on my firsthand experience, but if you feel your calling is in a not-mentioned field, then go for it.