Is It Muscle Atrophy if One Foot Is Smaller than the Other? 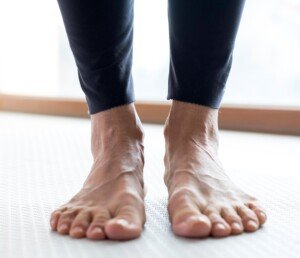 You’ve recently noticed that one foot is smaller than the other, and the same-size shoe is looser on that smaller foot.

The possibility of muscle atrophy is something that may coarse through your mind and worry the daylights out of you.

Certainly, if one foot is truly experiencing a wasting away of its muscles, it will become smaller.

Your shoes won’t fit evenly. This will be most apparent with dressy shoes rather than sneakers or slippers.

One Foot Is Smaller than the Other

“When assessing foot size there are two parameters, length and girth,” says Dr. David Beatty, MD, a retired general practitioner with 30+ years of experience and an instructor of general medicine for 20+ years.

“Most people have a slight difference in length between their right and left feet,” continues Dr. Beatty.

“This is mostly because that’s the way we’re born. If one foot is a bit longer at birth it continues to be a bit longer through childhood and into adulthood. The bones in one foot are just a bit longer.

“A few people are affected by medical conditions that lead to one foot being shorter than the other.

“Any condition that causes contractures in the muscles or tendons of the feet can cause the affected foot to be shorter.

“Cerebral palsy [usually present at birth from delivery complications] or paralysis due to polio are examples.

“There isn’t a large muscle mass in the feet, but if the muscles there did atrophy, it would be more likely to reduce the foot girth rather than the length (unless there was an associated contracture).

“The girth of the feet is also different in many people. This is affected by innate size, but will also vary throughout the day — varying with the degree of fluid retention in the feet.

“The girth can also change gradually over the years as bony changes occur.

“Bunions are a prime example. Arthritis can also cause bony prominences and outgrowth which can lead to a difference in foot size.”

What if you’ve only recently noticed that one foot is smaller than the other?

Find out if this applies to length vs. girth. This will be easy by trying on a pair of snug shoes.

Chances are, you’ll discover it’s a length issue. If it’s a width issue, you may have an early bunion, which develops on the outside of the inner foot – something perhaps you’ve never noticed before. 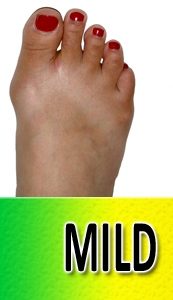 A mild bunion can make a foot feel bigger inside a shoe, even though you may not notice the early stage of bunion formation. DrNealBlitz, CC BY-SA 3.0/creativecommons.org/licenses/by-sa/3.0/ Wikimedia Commons

It’s also possible you’ve had uneven feet all along and, due to footwear, never really noticed it in the past.

As mentioned, uneven feet will be more noticeable when wearing dressy shoes, particularly among women wearing high-heeled shoes which are made narrower than is athletic or casual footwear.

In my case, one foot has always been bigger than the other, but it’s not something I realized during childhood due to the footwear.

As I got older, and my shoe preferences changed, I began noticing it. In fact, one time I switched shoe sizes at the store, so that in the shoebox were two sizes a whole number apart.

Needless to say, the cashier opened the box to check the sizes, and I was told that I couldn’t buy shoes of different sizes.

That the cashier had been instructed to routinely open shoe boxes and look at the sizes means that switching shoe sizes must’ve been a fairly common practice among shoppers.

Having one foot smaller than the other is probably much more common than we think.

For added reassurance, think of it this way: One foot is bigger than the other.

Another way to really feel reassured that you don’t have atrophy in your foot is that there has been no decline in your ability to go up and down a staircase.

If you had a weak foot with muscle atrophy, you’d notice a change when using a staircase.

You’d notice that something was wrong with that foot — a new-onset problem — when doing the things you normally do such as jogging, hiking, running around with the dog, etc.

The absence of deficits in physical activity performance should provide significant reassurance.