Young Children with Autism Can Have Normal Eye Contact 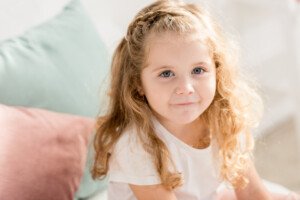 Have you been told your toddler or preschooler can’t possibly be autistic because they have good eye contact?

Are you aware that this is outdated thinking?

It’s a thing: Parents being told that their young child can’t possibly be autistic because he or she can give eye contact.

But this is very outdated thinking. It’s along the same vein as, “You can’t be autistic because your job involves customer service.”

“Neither of my children ever had issues with eye contact,” says Meghan, a professional therapist who runs M Perfect Consulting.

“They both use eye contact daily and have never refused to look at anyone in the eye.

“The eye contact thing is frustrating, as I have been told the same thing [that they can’t be autistic because they give eye contact] about my boys.

“Family and strangers have been the most people who say that they can’t be Autistics due to them having good eye contact.

“They say it based on misinformation, so I understand the confusion, but it is still invalidating.

“They don’t give too much eye contact either or stare intently at people.”

I was diagnosed with ASD in the springtime of 2022.

I can win a staring contest, though I need to be upfront by pointing out that if I had ever had struggles with eye contact as a toddler and preschooler, I wouldn’t necessarily remember it, including directives to “look at people when they talk to you.”

However, I remember a lot from age five and on, and I have zero recollection of anyone ever pointing out that I don’t look people in the eyes.

In my extensive research on eye contact in autism (yes, it became a special interest once I began my diagnostic journey), I came across a post on autismforums.com by a parent who said their toddler was denied an ASD diagnosis because of normal eye contact.

A second assessment by a different provider was given, and the toddler was diagnosed autistic.

There was a writing group I was a member of, and one of the men had a two-year-old who’d been diagnosed autistic. He said the toddler had good eye contact.

If a young child with normal eye contact is given a diagnosis of autism, you should not assume that this was a misdiagnosis!

“With my oldest son I noticed his toe walking and rigid thought process first,” says Meghan, referring to early signs of autism that she had noticed.

“His pediatrician mentioned testing when he was about two years old, but we didn’t start until he was three and had begun banging his head on the floor at daycare when upset.

“He was also a very advanced baby and was feeding himself early and walking well before he turned one.

“He also loved other kids and to play, but did not pick up on social cues and had awkward play with others.

“He was diagnosed as autistic when he went to pre-K in public school, and from the first day he was overwhelmed with the amount of students in the general education rooms and was not able to focus or stay calm and seated.”

“With my youngest son we noticed that he seemed to be in his own head a lot,” continues Meghan.

“From a few months old he would just stare at sunsets, or fans, or spots in the distance for long periods of time without making a sound.

“By age three he only said three to five words and was evaluated and diagnosed autistic.

“He never cared for other children and played alone all the time and walked away when other kids tried to engage him including his brother.

“He would also play with things like paper towels by throwing them in the air and watching them float to the ground.

“He rarely played with actual toys and preferred things like masking tape and ribbons that he could make fly in front of a fan.”

This little boy with ASD, too, has normal eye contact.

If an examiner says that your child can’t possibly be on the Autism Spectrum due to good eye contact – you’ll want to seek out a second opinion by a different provider.

You’ll want to first find out if that provider puts emphasis on the presence of normal eye contact.

Though “abnormalities with eye contact” can present quite often in children and adults with ASD, this is not a requirement for a diagnosis.