Can an Adult’s Xiphoid Process Be Felt with the Fingers? 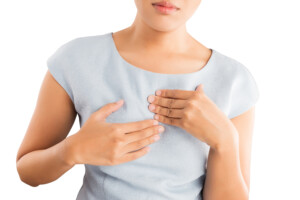 Have you discovered a small hard lump just below your sternum and between the ribs in that area? Are you wondering why you never noticed this before?

It’s likely that the first thing you thought of was a cancerous mass. Then you began wondering if this could be normal anatomy, since the hard lump is pretty much smack in the center or midline of your upper abdomen.

This happened to me. By freak chance, when I was in a hotel room with dim lighting, I was standing just outside the bathroom and looked in the mirror at my naked upper half.

I stood tall and erect, and noticed a subtle “bulge” below my sternum. Immediately I felt it with a fingertip: a hard bump under the skin, making me envision a jelly bean.

An exhaustive Internet search came up with some possible explanations, but none were slam-dunk.

For instance, I couldn’t locate any information about the xiphoid process being visible in an adult, or being palpable (felt with the fingertips as a small hard lump) in an adult.

I did find information that sometimes, the xiphoid process is visible in newborns, and that over time, it loses its visibility.

I also read that it can become inflamed – and with that, discomfort. Well, I didn’t have any pain.

And, in an epigastric hernia, the lump is supposed to be visible when you sit. Oddly, when I sat, the subtle bulge became invisible.

The bulge itself wasn’t the hard lump. I believe it was the skin around it being pushed upward, and the total surface area of the bulge was maybe that of a slightly oblong half-dollar coin.

But what my fingers felt was a hard something underneath, perhaps the width of a 25-cent coin, and the length was difficult to discern – perhaps three-quarters of an inch.

One thing was for sure: It was superficial, making me think that it wouldn’t take much for a knife to penetrate it.

Xiphoid Process Can Be Felt in an Adult 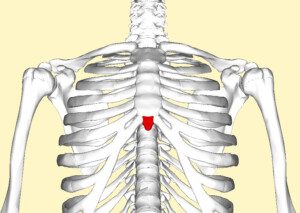 “The breastbone (sternum) has three parts,” says Dr. David Beatty, MD, a retired general practitioner with 30+ years of experience and an instructor of general medicine for 20+ years.

“The xiphoid process is the lowest of these parts. It’s made of cartilage in youth and becomes partly ossified (bony) in adulthood. Its size and shape can vary.

“When feeling it from outside the body it feels smaller than this. The xiphoid process feels bony and often moves a bit when pressed.

“As a general practitioner I would estimate that a couple of patients a year presented with this prominence at the tail end of the sternum.”

An MRI revealed that the small hard bump at the bottom of my breastbone was, indeed, my xiphoid process.

The MRI report, under “Impression,” stated:

There is accentuated curvature and mild rotation of the xiphoid process leading to mild prominence of the distal sternum as well as tip of the xiphoid which are both noted in the area percutaneous marking.

“Area percutaneous marking” refers to the tape that was placed over the lump.

“In many, it’s not that easy to feel, particularly if there’s a thick chest wall due to muscle or obesity,” says Dr. Beatty.

“The size and shape varies a lot, so a small flat xiphoid process will be harder to feel than a long, outwardly curving one.

“To feel it more easily, stand up straight and throw your shoulders back. Run your fingers down the front of the sternum (breastbone).

“The lowest hard bony piece is the xiphoid process. It feels slightly mobile in some cases.

“In a few people it isn’t entirely in the midline and points slightly left or right. In rare cases it’s bifid — having two protruding parts.

“Someone who notices a hard swelling there, for the first time, may fear the worst and assume it’s cancer.

“I’ve never seen a case, which I think is a xiphoid process, that turned out to be cancer.

“Occasionally someone gets an injury to the chest wall. When they feel around they notice the xiphoid process and think they may have broken something.

“Other people present because the xiphoid has been noticed by a partner and they’ve raised concern.

“Many will just ask about it during the course of a chest examination — even though they aren’t too concerned.

“Some are concerned that the xiphoid is a hernia. These are usually much softer and, in many cases, disappear when pressed.”

When in doubt, it’s best to consult with your doctor — and don’t be skittish about requesting some imaging.