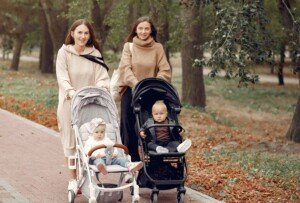 A morbidly obese woman couldn’t understand why she got fat despite pushing her baby “tons and tons” in a stroller.

She also couldn’t understand why the weight wouldn’t come off despite using a treadmill’s highest incline two hours every day. Her article says she was around 300 pounds.

I’ll explain why neither situation promotes the loss of excess fat.

First of all, when someone says “tons and tons,” this must come with a qualification. She’s a single mother with a full-time job and nobody helping her out.

So when she says “tons and tons,” it’s a safe bet this didn’t mean three hours a day, seven days a week.

What may seem like pushing a stroller tons and tons might actually amount to only 30 minutes or so most days of the week.

It’s a common phenomenon for people to unknowingly exaggerate how much they exercise.

However, what about the actual activity of pushing a stroller, regardless whether it’s half an hour daily or two hours daily?

Manufacturers of strollers want their users to find the task as easy as possible. Otherwise, they wouldn’t be able to sell their strollers.

Hence, strollers are designed for very easy pushing. This is not hard work. If it were, strollers wouldn’t sell well.

Pushing a baby/toddler in a stroller is not like pushing a wheelbarrow loaded with bricks. The weight of the stroller’s occupant is hardly felt.

What about those strollers that are designed for pushing while jogging?

This is great exercise, because the user is actually jogging. But in the morbidly obese woman’s case, she was only walking.

How fast was she pushing the stroller? She didn’t say in her article. She only said “tons and tons.”

Was she pushing it up a lot of hills? Again, we don’t know. However, pushing a stroller up a hill is good exercise for weight loss! This is because you’re walking up a hill.

Brisk walking on flat land is good exercise for the heart, but it doesn’t rank well for weight loss.

But there’s also an element we can’t dismiss: Fast walking for an obese person is hard work, because she’s propelling 300 pounds through space.

This can help her lose some weight, but it won’t be the magic bullet. The magic bullets are portion control of food, intense strength training, and high intensity interval training on a pedaling machine — or walking a treadmill incline without holding on: both safe modes for the knees.

Furthermore, we shouldn’t expect a morbidly obese woman to jog anyways, as this would be extremely arduous, and not safe for her knees.

Walking and pedaling are good modes of exercise for morbidly obese people. If they have a baby or toddler, they can combine the enjoyment of pushing a stroller with accumulating walking distance on a daily basis.

However, she must be realistic: A lot of pushing of a stroller will not make her drop a hundred pounds.

Furthermore, something tells me that the author didn’t do the “tons and tons” at her fastest possible speed, or, to put another way, a speed that kept her continuously breathing hard.

She likely pushed that stroller (come on, let’s be realistic) at “stroller pace,” which is the pace you see any woman, regardless of size, pushing a stroller.

As for the two hours a day on a treadmill’s highest incline, I’ll be she was tightly holding on for every minute of those two hours.

All the time I see people who are straight size and slender clinging to the treadmill at high inclines. They’re tilted back as a result, and this CANCELS OUT THE INCLINE.

You might be thinking, “Well, it’s still a two-hour walk, isn’t it? It’s still better than nothing, isn’t it?”

Yes, it’s a two-hour walk, with the assistance of holding onto something. The calorie readout on the machine is grossly inflated, and it’s triggered by the machine’s settings.

If you let a treadmill run at high incline and 4 mph without anyone on it, it will still show the same high calorie readout!

The higher the incline, the tighter people hold on, making what appears to be a kick-butt walk an easy one. It won’t scorch body fat.

As for it being “better than nothing,” we shouldn’t set the standard so low as to be “nothing.”

The bar needs to be set a lot higher, so that you don’t have to compare your exercise to “nothing.”

If it’s impossible to walk on a high incline without holding on, then LOWER THE INCLINE and/or REDUCE THE SPEED.

Though there are medical conditions or medications that can cause weight gain, and the very rare genetic Prader-Willi syndrome causes never-ending intense hunger, morbid obesity is the product of lifestyle. No human body is meant to have rolls of fat hanging off of it.

Summary: Why Pushing a Stroller Tons and Holding onto a Treadmill Won’t Melt Fat

The physical exertion of the typical stroller outing, and of holding onto a treadmill, are not sufficient to force the body to burn a lot of fuel.

“Tons” of time does not always equal tons of energy expenditure. Many overweight people, though, continue to make this association.

Twenty minutes of high intensity interval training, done twice a week, will shear off more fat than will three hours a day of pushing a stroller at “stroller pace.” Here are HIIT guidelines for obese people.