How My Autistic Special Interests Show in My Artwork 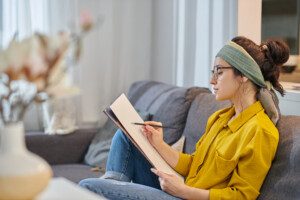 I’m a prolific illustrator and never knew that my autism – which would not even be diagnosed until many years later – influenced my artwork in college.

So there I was, in college art class, sketching nude models, inserting my special interest of mental patients into them.

I don’t know how this hyperfixation began, but at some point in college, I developed something of an obsession with mental patients, mental hospitals and schizophrenia. 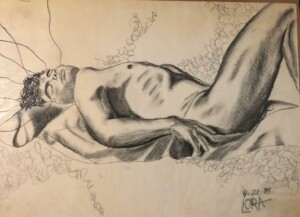 In the charcoal illustration above called “Electrodes,” there are three special interests or hyperfixations going on here.

The one with mental patients is depicted by the electrodes on his head.

Then, note the man’s stubble. I had, and still have, this fixation on stubble.

Finally, note his frontal hairline. This is an offshoot of a hyperfixation on facial deformities.

I had been intrigued by a particular congenital craniofacial anomaly that often came with a low hairline and widow’s peak. Of course, I worked that interest into this illustration as well. 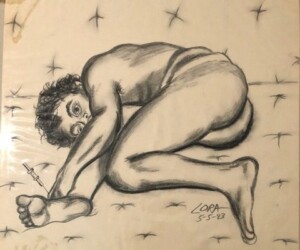 In “Padded Room with Syringe,” my keen interest in widow’s peaks is clearly evident, along with stubble, the latter which I associated with mental patients.

Whenever I drew mental patients (they were always men), every single one of them had stubble.

The syringe in the man’s foot indicates my fascination with Thorazine (chlorpromazine) and other antipsychotic drugs that were commonly used for schizophrenia.

I’d often initiate discussions about “chlorpie” with my brother who was a chemist. He’d engage with me — the only person who’d actually show interest in this topic.

Note also the padded room, indicative of a mental hospital. 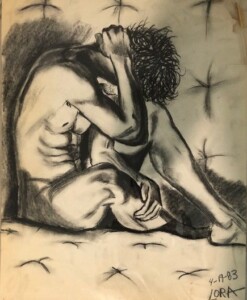 “Padded Room” speaks for itself. I also always made sure that the mental patietnts I drew had fit-looking bodies.

I was appalled at how fitness equipment was lacking at mental hospitals, and that chain smoking was very prevalent among schizophrenics. 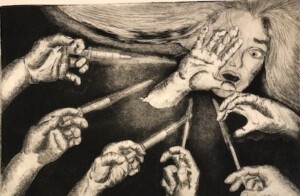 Okay, I just stated that my mental patients were only men. But the above etching is an exception.

I thought it’d be far more dynamic for the patient, surrounded by nurses wanting to inject her with Haldol, to be a woman.

More Artwork from an Autistic Woman 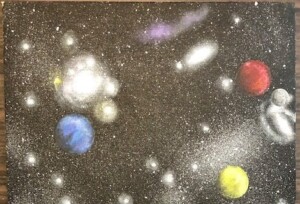 I never had a special interest in the cosmos; I believe my interest was only neurotypical-grade. But it was strong enough to inspire the above acrylic painting. 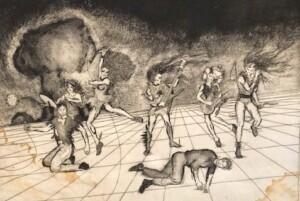 There’s no special interest reflected in “The Atomics.” However, the autistic attention to detail and precision may be evident.

This etching was part of my etching class; I wanted to come up with something really unique, cool and “rad.” Can’t get much more rad than a women-lead rock group called “The Atomics” with an atom bomb going off in the background. 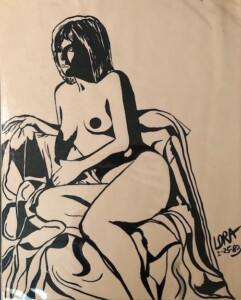 The Ink Wash Woman shows my versalitity with inkwash. However, the ominous look about her face isn’t purely by accident. 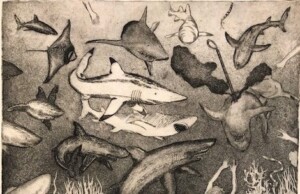 The “Sharks” artwork reflects an obsession I had with sharks and “Jaws” several years prior, but by the time this art was created, the interest had been downgraded to NT-grade.

Look closely at this art; there’s a woman in the lower right, swimming among the sharks.

However, anyone who watches “SHARKWEEK” or “Shark Fest” knows that there are women who literally swim among sharks.

I hope you enjoyed all of this art by an autistic woman!