Should Obese People Do Sled Workouts for Exercise? 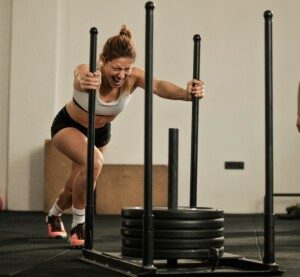 What are the pros and cons of sled workouts for obese, even morbidly, individuals?

A sled exercise can be in the form of pushing or pulling, and these two types can be further broken down.

More and more gyms are including sled equipment. Plus, a variety of sleds for workouts are sold online.

It’s not just football players who use sleds as part of their workout regimen.

This compound exercise is now being done by middle-age women and even teen girls.

#1. Basic push. The user places their hands on the handles and pushes forward, sled ahead of them.

The ambulation may be a walk, trot or run, depending on how much weight is loaded on the sled and what the user wants to achieve.

#2.  Drag. The user moves forward, either with a walk, trot or run, while ahead of the sled, which is connected to them via a harness.

However, the user may also hold, in front of their chest, handles that are part of straps that are attached to the sled.

#3. Backward pull. Wearing a harness or holding to strap handles, the user pulls the sled, which is in front of them, by walking or trotting backwards.

An obese and especially morbidly obese person may figure that sled workouts aren’t too meaningful since they’re already carrying around a lot of excess weight.

But according to this line of logic, most other forms of exercise would be pointless as well.

• Produces the same effects as other types of exercise, such as stronger muscles and joints, and improved cardiovascular function.

• Provides an alternative to the same ‘ol boring exercises. For example, pushing a sled that’s not loaded can replace a treadmill workout.

• Can burn a significant amount of calories when done interval style. For instance, the sled could be loaded with enough weight to make 30 nonstop seconds of pushing difficult.

The user can then rest for a minute or two, then push for another 30 seconds.

A completion of eight, 30-second “work intervals” that leave the user panting after each interval will not only dramatically improve fitness if done twice a week, but will burn much more fat than 1,000 crunches a day or merely walking level on a treadmill an hour a day.

The user can alternate type of exercise, too: Push in one direction, then pull backward in the other direction.

Or, they can do the same type of movement for all eight intervals (when it’s time to go in the opposite direction, just turn the sled around or reattach the straps).

• Many muscles can be worked at once. If you’re pushing, your upper body gets a workout, along with your legs.

• The action of sled pushing or pulling can have significant carryover to the tasks of daily living.

For example, suppose you’re pushing someone in a wheelchair up an incline, such as at an airport, or an inclined walkway.

This will be a piece of cake if your body is used to pushing a sled. Sled exercise strengthens the entire legs, the buttocks and the core.

• Reduces self-consciousness. Some overweight people feel self-conscious at the gym, particularly when jogging on a treadmill or track. But there’s something about pushing or pulling a sled that can actually eliminate this feeling.

Perhaps it’s because sled work is associated with football players.

• Does not require balance.

• Does not involve quirky body positions.

• Does not require concentration on correct form.

• Is safe on the joints and has an exceedingly low potential for injury.

As a former personal trainer, as well as a sled user myself, I just can’t think of any cons about this exercise mode for even very overweight people.

If sled work aggravates a pre-existing knee problem, then chances are pretty high that using a treadmill would cause the same aggravation; avoid both modes and see if pedaling exercise isn’t gentler on the knee.

Going hard with sled exercise will be taxing on the body in a new way that new users aren’t familiar with.

However, this experience would also occur to straight-size or slender users.

For example, pushing a sled can induce a “burn” in the low back. This can happen just as likely with a thin user.

This means their low back muscles need to get more resilient.

The solution? Keep on using the sled, though you’ll want to either shorten the distance per push, and/or lower the weight load, so that your low back doesn’t become overwhelmed.

Tips for Using a Sled

If you’re new to this form of exercise, you’ll want to see how you do with an unloaded sled. See how long you can push or pull it.

Don’t be discouraged if you completely lose steam within two minutes. Remember, your body is NOT used to this mode.

Furthermore, who says you have to push or pull for 20 minutes nonstop anyways? If you can’t push longer than half a minute, then consider that your work interval. Rest, then repeat.

Do as many work intervals as you feel up to, but try to get in at least eight. However, even four work intervals will produce a nice training effect.

Sled work can be part of a bigger routine. For example, you can do bodyweight squats or squats with a plate or dumbbells, then go immediately to a sled and push or pull.

If you find that you’re using a sled only once a week, this will still produce a training effect and can be part of a fat loss program.