Black Stools from a Nosebleed vs. from a Cancer: Comparison 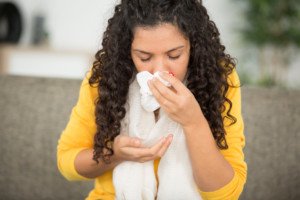 You just noticed something maroon or black and sticky looking in your poops. It’s clearly not your stools, but something mixed in with them.

You realize it really does appear to be blood. You may also know that blood in the stools can mean colon cancer, small-intestinal cancer, esophageal cancer, stomach cancer or a bleeding ulcer.

If you’re over 50, these worries will carry more weight, since the risk of these cancers goes up in age. However, younger adults aren’t immune to GI tract cancers

You may also be considering (and very much hoping) that the old blood that’s mixed with your poops is from having swallowed blood from a nosebleed within the past 24 or so hours.

But can the amount of blood you swallowed from your nosebleed be enough to show in your toilet bowl?

“Digestion and microbial degradation of blood either ingested in the diet, swallowed from a nose bleed, or internal bleeding from within the gastrointestinal tract can also affect the color of the stool,” explains Joseph Weiss, MD, board certified gastroenterologist and clinical professor of medicine at the Medical School, University of California, San Diego

Dr. Weiss continues, “Blood, if digested and degraded by microbes, changes in color from deep red and purple to dark black.

“This gives it the descriptive term melena for black sticky tarry stool with a characteristic pungent foul and sickly odor.”

If you’re in the habit of looking at your BMs in the name of health (or health anxiety), it’s strongly advised that you avoid this in the few days following a nosebleed.

This way, you won’t suffer from a wave of high anxiety should you see what looks like blood with your poops.

However, if you have any other symptoms concurrent with the appearance of maroon goop or a black or very dark gluey-looking substance that looks different from stool matter, then it’s time to see a gastroenterologist:

• Sensation of food being stuck in your chest after swallowing

• Having switched to softer foods to overcome swallowing difficulties

Do not pass your symptoms off as “just a little heartburn” or “my acid reflux is acting up” if you have NOT had a negative colonoscopy and upper endoscopy within a reasonable time period.

Of course, you can’t keep blaming a nosebleed after a few days if you continue to see blood in your stools.

The Difference Between Nosebleed Blood and Cancer Blood in Your Stools

There is no difference in how it presents in the toilet bowl — or under a magnifying glass if you’ve removed your feces for a closer inspection. No difference.

The red, maroon or black substance with your bowel movements looks the same regardless of origin.

Whether the origin is from having swallowed blood from a bleeding nose, an active ulcer or from a tumor growing inside your esophagus or large colon, it will appear the same under the toilet bowl water or under your magnifying glass. A doctor won’t be able to tell the difference, either.

The only way to find out what’s causing, or what’s not causing, blood in your BMs is to undergo diagnostic procedures. This may include a barium swallow.

And just because you swallowed a ton of blood from a nosebleed yesterday and see dark blood mixed with your poops today doesn’t mean you can’t have a bleeding tumor.

Dr. Weiss is the author of  The Scoop on Poop! Flush with Knowledge. He has also presented numerous presentations on various health topics.