Can Young Women Get Esophageal Cancer? 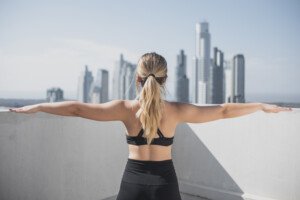 What’s especially very alarming when younger women get this very deadly disease is that they are far more likely to receive a very delayed diagnosis when compared to older men.

The hallmark symptom of esophageal cancer is what a patient describes as “trouble swallowing food.”

However, quite a few people believe they have this problem.

It can occur when a perfectly healthy person is eating while worrying to high heaven about something going on in their life.

It can also happen to a healthy individual who suffers from health anxiety – e.g., believing they have bulbar-onset ALS, which causes difficulty swallowing (even saliva).

While this healthy individual is eating, they begin worrying about bulbar ALS and perceive a problem swallowing their sandwich. The mind is a very powerful entity.

However, the big difference between perceived swallowing difficulties and those caused by esophageal cancer (and ALS for that matter) is that the condition — when caused by pathology — noticeably gets worse over a fairly short period of time. It also doesn’t come and go. It’s always there.

People with even the most intense anxiety or health worries will still be able to get any type of food down including chunks of steak and wads of bread.

If a young woman starts thinking she might have esophageal cancer due to an apparent struggle with swallowing food, yet she is still able to consume hard foods (including big mouthfuls) several months after her worries began – and she has not been forced to switch to soft foods – then it’s a pretty safe bet that she doesn’t have esophageal cancer.

On the other hand, if over only weeks, the swallowing of food has become progressively more difficult – to the point where she’s had to stop eating items like apples, baked goods and cuts of meat – then this would be very worrisome.

“Esophageal cancer is more likely to afflict older men than younger men or women, but does occur in women and over a range of ages including the young,” explains Alex Little, MD, a thoracic surgeon with a special interest in esophageal and lung cancer, and clinical professor at the University of Arizona.

Esophageal cancer, unlike ALS, does not cause problems swallowing saliva.

The issue becomes apparent only when eating. The act of swallowing food begins at the mouth and ends at the stomach where food goes.

Any difficulty along this pathway qualifies as “trouble swallowing.”

There is the case of a young woman who was diagnosed with esophageal cancer.

However, the 27-year-old woman had a unique circumstance: a history of bulimia nervosa – self-induced vomiting to avoid absorbing calories.

Though she had reported the bulimia lasted only one year, 10 years prior, her medical team believes that this was all that was needed to cause irritation to her esophagus, which then lead to atypical cell development and then onto a malignancy.

“I would not, however, make too much of this exceedingly rare scenario,” says Dr. Little.

If anything, a woman with bulimia nervosa is at high risk of dangerously low electrolytes which can lead to sudden cardiac arrest.

Unless she’s been having worsening dysphasia with a feeling of food sticking in her chest, esophageal cancer should be the least of her worries if she’s been voluntarily purging food.

Esophageal cancer is over four times more common in men than in women.

Below is a chart showing age brackets and incidence of disease for men and women combined. 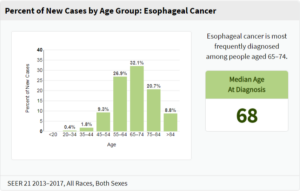