Can Esophageal Cancer Cause a Bloody Taste in the Mouth? 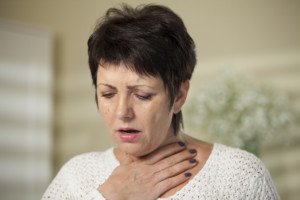 Do you have symptoms making you fear esophageal cancer and have recently begun tasting blood?

A tumor in the esophagus is fairly close to the throat.

Unexplained symptoms that involve swallowing food can make a person fearful they have esophageal cancer, especially if they have the hallmark risk factors of smoking, drinking, chronic acid reflux and age over 50.

Symptoms of esophageal cancer are what a patient would describe as any of the following:

• Food feeling stuck in the chest.

• Food sticking in the chest.

• Food feeling like it’s having trouble getting past the throat once it has cleared the mouth.

• Food feeling like it’s having a problem getting down to the stomach.

• Food coming back up right after it’s swallowed.

• Having to switch to a soft food diet to accommodate the swallowing difficulties.

• Pain in the chest right after swallowing (an uncommon symptom).

However, a person can have new symptoms that have nothing to do with esophageal cancer, but depending on how that individual’s mind works or their level of health anxiety, they may end up with ongoing anxiety over esophageal cancer.

This would be especially true if they then began tasting blood and began wondering if the tumor could be bleeding and, somehow, ejecting trace blood up into the throat, causing the taste.

“Esophageal cancers can bleed, but usually it’s a slow process and not of large amounts,” says Alex Little, MD, a thoracic surgeon with a special interest in esophageal and lung cancer, and clinical professor at the University of Arizona.

“In this circumstance the blood typically passes on down and is finally present in the stool.

“A low-grade anemia is the result, and the anemia is identified when the patient is being evaluated for a known or suspected esophageal cancer.

“As the bleeding is slow and the blood passes down, it is unusual for it to get into the mouth and be detected by its taste or being seen.

“Could happen — but would be unusual.

“It is possible for an esophageal cancer to invade into the aorta — which is right next to the esophagus — and lead to massive bleeding.

“This fatal scenario is very uncommon — as for a tumor to be large enough to accomplish this invasion, it would be causing severe dysphagia [difficulty getting food down], leading to a diagnosis and treatment.

“Cancer of all types, including both esophageal and lung, affect metabolism and could cause patients to have a metallic taste sensation.

“I speculate that could also be interpreted as the taste of blood.”

With esophageal cancer, then, it’s possible to taste something metallic – but – it would not be logical to visit the idea that an esophageal tumor is bleeding and leaking blood upward into your throat. Don’t go there.

Then what’s causing your symptoms?

Your symptoms would be highly suspicious for esophageal cancer if you’ve had to switch to a soft food diet and if food comes back up immediately after swallowing.

A benign cause of the perception of difficulty swallowing food would NEVER force you to switch to a soft food diet.

The issue of tasting blood could be a coincidence on the timeline of your other symptoms.

It could be, for all you know, a cut on your gum from eating tortilla chips.

It could be a benign condition that your dentist could diagnose.

A metallic taste that does not go away needs investigation by a physician, which could begin with your primary care doctor or possibly an ear, nose and throat specialist.

A metallic taste actually has many causes, and yes, some are serious including cancer.