Why Can GERD Cause Chest Pain 2 Seconds After Swallowing Food? 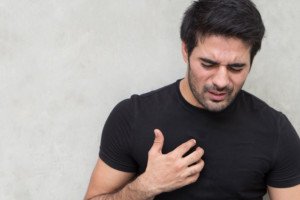 You have no problem swallowing food but two seconds later, you feel a very brief pain or pressure in your chest.

You’ve been diagnosed with GERD and have other symptoms such as burping, occasional mild regurgitation and maybe some heartburn when you lie down for bed at night.

When the pain occurs a few seconds after swallowing food, it may be at the level of the lower esophageal sphincter (LES) or a bit higher up the chest, but it’s definitely not in the throat or neck area.

It’s reassuring to know, at least, that there is no difficulty with swallowing (dysphagia) any amount or texture of food.

It goes down without a hitch, but usually not without a discomfort in the chest about two seconds later when it’s at some point down the esophagus.

The pain is momentary, disappearing once the food gets past that point, and then it starts all over again with the next swallow.

“When discussing such a symptom, we have to be very precise with the terminology and description of the symptom, as there are several types/causes of chest pain that can occur in GERD and other esophageal disorders,” says Santosh Sanagapalli, MD, a consultant gastroenterologist, endoscopist and specialist in esophageal disorders.

Pain with swallowing is called odynophagia.

“This refers to pain during the act of swallowing or within seconds of the food travelling down the esophagus,” says Dr. Sanagapalli.

“Odynophagia is a sharp and often severe localizing pain that seems to move down the chest in tandem with each swallow.”

In some patients, the pain is not sharp, but definitely noticeable.

“Odynophagia is caused by any sort of break in the mucosa (inner lining) of the esophagus,” says Dr. Sanagapalli.

“Such a break in the lining may relate to esophageal inflammation (termed esophagitis) or esophageal ulceration.

“The pain arises when the swallowed food or drink makes contact with the inflamed area of the esophagus.”

If you’ve noticed that there’s never or rarely any pain with your first meal of the day, this could be due to a less inflamed mucosal lining from not having any food contact overnight.

But once you resume eating, the repeated food contact throughout the day kicks things up again.

And the problem continues day after day as long as the acid reflux keeps occurring.

Where did this come from in the first place?

However, in younger people, obesity or excess belly fat can induce acid reflux.

Smoking and drinking can also cause acid reflux.

Drugs like Nexium and Prilosec are effective “acid blockers.”

They don’t block all the acid, though; they only reduce it.

But they may reduce it enough to give the irritated mucosa a chance to start healing.

In addition, you should take natural measures to eliminate the GERD.

If you’re overweight, work on losing weight. And if you smoke, quit. If you drink, cut back. Limit foods that trigger symptoms (spicy, chocolate, mint, pepper, citrus).

So yes, GERD can definitely cause focal chest pain two seconds after swallowing food, but, says Dr. Sanagapalli, “It is uncommon and only a small minority of patients with GERD describe this symptom.”