Will All Morbidly Obese People Eventually Get GERD? 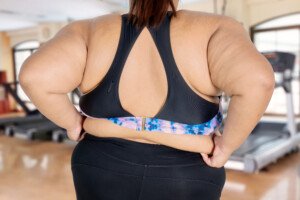 Morbid and even moderate obesity is a major risk factor for GERD.

Overweight individuals tend to focus on heart health, but gut health should also be at the top of their list of health concerns.

It’s more and more common these days for a morbidly obese person to believe they are healthy because their blood pressure and blood sugar are normal, and even their cholesterol profile may be normal (for now).

However, digestive health is often tossed to the curb, not even considered.

In fact, a very overweight person may actually be experiencing digestive symptoms or other seemingly innocuous symptoms and not even consider that these are the result of excess weight bearing down on their stomach and causing acid reflux.

Chronic acid reflux can lead to a condition called Barrett’s esophagus, which, in a very small percentage of cases, will develop into esophageal cancer.

An obese person may be having GERD symptoms (excessive burping, regurgitation, heartburn) and pass them off as simply being related to overeating, fast eating or too much spicy food.

GERD can also cause back pain, which the overweight person may attribute to their size or lack of exercise.

Will all morbidly obese people sooner or later get GERD?

“No, we cannot say that they will ALL eventually get GERD,” says Santosh Sanagapalli, MD, a consultant gastroenterologist, endoscopist and specialist in esophageal disorders.

“Certainly, obesity is one of the strongest risk factors for GERD.

“Every extra pound in weight increases a person’s risk of GERD.

“Obese individuals, especially those where the fat is predominantly belly fat, are prone to developing GERD due to increased pressure on and within the stomach.

“This increased pressure in the stomach produces a substantial force against the anti-reflux barrier (between the esophagus and stomach) and drives acid upwards into the esophagus.

“Further, obesity is a risk factor for development of a hiatus hernia, which if present, further weakens the anti-reflux barrier and makes it easier for acid reflux to occur.

“We can therefore say that a morbidly obese person is very likely to develop GERD, but it may not happen in all of them.

“Some morbidly obese patients may have a fat distribution that happens to be predominantly in other parts of the body (with a relatively smaller belly), so that the pressure on the abdomen is not so great.

“Others may have been lucky to have been born with a strong anti-reflux barrier so that even in spite of obesity, they do not develop acid reflux.”

What is an overweight person to do? 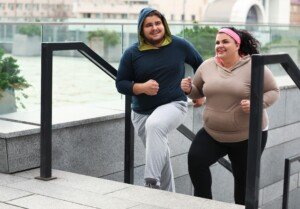 Additional symptoms include a chronic cough, hoarse voice, discomfort in the chest after swallowing food, chest pain in the middle of the night and bad breath.

Resigning to taking antacids or drugs like Prilosec or Nexium every time symptoms act up isn’t a wise decision because the side effects of long-term use are believed by many doctors to be potentially harmful.

Though thin people can also suffer from gastroesophageal reflux disease, it isn’t because they’re 125 pounds. There are other causative agents such as smoking and drinking.

However, obesity remains a king risk factor for this common ailment.