Are There Medical Conditions Only Obese People Get? 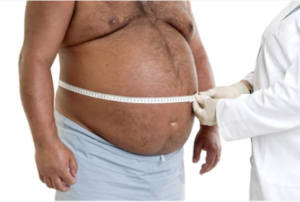 Is it really true that there’s no disease that only fat people get? And if so, does this mean that the dangers of obesity should be downplayed?

Some influencers have posted, “There’s nothing wrong with being fat because there’s no disease that only fat people get.”

Obesity is when a person is at least 20% over their ideal weight range, relative to height and gender.

Morbid obesity is being at least a hundred pounds overweight. “Obesity” and “obese” are also medical terms.

Are there medical conditions that only fat people can get?

“The only medical problems that only obese people get, that I can think of, are side effects or consequences of treatment,” says Dr. David Beatty, MD, a retired general practitioner with 30+ years of experience and an instructor of general medicine for 20 years.

The medical problems would include side effects of the drug Orlistat (a weight loss drug), and bariatric (weight loss) surgery.

There are a few situations that seemingly only obesity can cause: a rash from chafing thighs, and an infection under rolls of belly, back or leg fat.

With that all said, it’s pretty accurate to state that there are no medical conditions or pathological processes that require only obesity to develop.

But this isn’t the same as obesity being the cause of a medical condition that a thin person can get!

But it wouldn’t be caused by their low body weight. In their case, it’d be caused by any of the following: smoking, drinking alcohol close to bedtime, large adenoids and naturally excessive throat tissue.

Another example is that obesity can lead to osteoarthritis in the knees due to excess pressure bearing down on this finicky joint.

When a thin person develops osteoarthritis, it’s not from their weight. It could be a genetic component combined with a past injury or chronic stress from sport.

Being thin (as in slender or straight size, rather than malnourished stick skinny) does not lead to nor raise the risk of any of those conditions.

When a thin person gets any of them, the causes would include but not be limited to smoking, a junk food diet and lack of aerobic exercise.

Plus, genetics and mental stress have been strongly implicated in some of those conditions when combined with other risk factors.

In a nutshell, there are no diseases that being slender or straight size causes, but there are plenty that being fat causes.

Read that again, very carefully. It gets past a lot of people. However, I’ll happily clarify again.

1     Obese AND thin people get the same illnesses and medical conditions — with a few quirky exceptions such as a painful rash between the upper part of the thighs.

When you think of health ailments that seem to affect only very overweight people, you’ll be able to also envision a normal-weight or trim person with the same problem – but from a different cause.

For instance, mobility impairment: A morbidly obese person may not be able to bend over, while seated, to pick something up from the floor, due to a large midsection and no other cause.

But a thin person may have this same problem — but due to a slipped disc.

However, an obese person can also have a slipped disc (e.g., from a work related accident), but in many instances of health conditions among very heavy people, the weight is either a direct cause or an aggravator.

Thus, the excess fat on that individual with the slipped disc is making this spinal injury worse.

2     Obesity causes or is a major risk factor for many major health conditions (e.g., uterine cancer, colon cancer, miscarriage, infertility, plus all the previously mentioned ones).

3     Being slender or straight size does not cause, nor is a risk factor, for ANY of them.

4     All of those conditions in thin people would have causes unrelated to body weight (e.g., smoking, lack of exercise, excessive sitting, high sodium diet and too much processed food).

Keep in mind that if a very large person smokes, the smoking will damage their body, but this doesn’t mean the obesity won’t. It still will!

If you’re going to smoke or avoid exercise, it’s better to weigh 150 pounds than 250!

Of note: Untreated sleep apnea in a thin person can lead to high blood pressure and chronic heart failure.

Smoking has been implicated in uterine and colon cancer — regardless of the patient’s weight.

Lack of exercise or a sedentary lifestyle (regardless of weight) has been strongly implicated in the development of many illnesses and conditions.

What diseases can only thin people get?

There’s a difference between being what most people would say is “thin” and being TOO THIN.

Even a woman of average height who weighs 125 lbs. and wears a size 8 might be called “thin” by her friends. But she’s a far cry from a same-height woman who weighs 92 lbs. 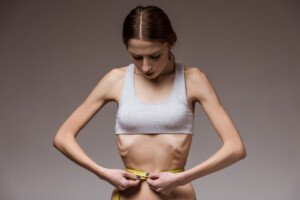 Being even a little underweight is a risk factor for brittle bone disease or osteoporosis. But this fact needs a huge asterisk.

The reason underweight is a risk factor for breakable bones in older age is because the bones never get a chance to get dense and strong while supporting a very lightweight body.

Obese people are at lower risk for osteoporosis because all that extra weight toughens up the bones.

However, this doesn’t mean a fat body can be healthy. Do NOT take this out of context.

I want to inject here the morbidly obese men and women who can powerlift impressive loads of weight. This may create the illusion of good health.

A significant risk factor for many illnesses down the road doesn’t preclude the ability to bench press 225 pounds.

Powerlifting is a sport, not a health endeavor, and it’s certainly heard of that many competitive powerlifters eat a lot of junk food on a daily basis.

Their goal is to move the heaviest weight possible for one repetition, not to have clean arteries and great kidneys.

When “thinness” or “underweight” are named as a risk factor for osteoporosis, that big asterisk needs to follow:

*When in the absence of strength training.

It’s not believable that a “thin” woman who deadlifts 225 lbs., squats 135, does heavy leg presses, and does jumping routines (plyometrics) and wind sprints is at risk for weak bones!

The ones at risk are the ones who don’t do any consistent weight-bearing exercise.

Being underweight can also lead to missed menstrual cycles and difficulty conceiving.

But in these cases, the underweight is significant, rather than your typical 125 or even 115 lb. woman in an average height range.

Being “way too thin” can also lead to compromised immune function and complications from surgery.

Of course, anorexia nervosa puts a woman at risk for chronic as well as acute conditions, including multi-organ failure leading to death.

But we really need to get away from discussing the medical conditions that being too underweight, let alone anorexic, can cause.

After all, when very large influencers point out that thin people can be unhealthy, they usually refer to your typical size 6 or even size 8 or 10 woman, or your typical slender-built man — rather than someone who’s emaciated!

Being merely slender does NOT cause or contribute to any known medical condition, let alone cost the U.S. billions of dollars in healthcare every year like obesity does.

Though the average size 6/8 woman might be at greater risk for future brittle bone disease, when compared to the average size 18 woman — don’t forget that the absence of long-term strength training would have to be present in that thinner woman.

Can fat people be as healthy as skinny people?

Dr. Beatty explains, “They sometimes are, especially when young. However, in my experience, when an obese person gets into their 40s and 50s, their health usually begins to suffer in one way or another.”

All-cause mortality is increased, says Dr. Beatty. This cannot be said of the slender population.

When it comes to disease caused by obesity, we typically think of cardiovascular conditions and diabetes.

But Dr. Beatty points out that obesity can make gallstones more likely. He also explains, “Osteoarthritis is more prevalent. Imagine the stresses the knees and hips are put through in someone who is morbidly obese.

“The joints may be carrying double the weight of someone who is in the ideal weight range.”

Tape this to your refrigerator: Just because thin people get the same diseases as fat people doesn’t mean that obesity can’t cause or make worse these very same conditions.