Can a Person Live with just Half of One Lung? 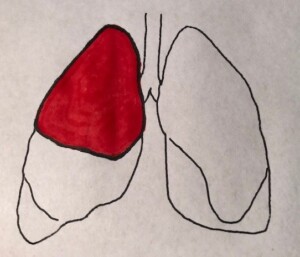 We know that people can live with only one lung.

But what if half of that remaining lung were removed, reducing total lung mass to 25%?

Now just to be clear, this article is about initially having one lung removed (due to cancer) and surviving with just the whole remaining lung.

But then, down the road at some point, the patient’s remaining lung develops cancer – not diffusely but locally – say, in the lower portion.

And let’s say it doesn’t respond to chemotherapy or radiation.

Seems that there would be only three options left.

#1      Accept a terminal diagnosis and wait for the cancer to consume the entire lung and die.

#2     Lung transplant. However, these are rare and require rigid qualifications.

#3    Undergo surgery to have the cancerous portion removed, so that all that’s left is approximately one-half of that lung. Living with one-fourth of one’s total lung mass would seemingly be preferable to dying.

One has to wonder, then, how many people are out there living with only one-half of a single lung.

“My first point is that people differ in their ability to function after loss of some amount of their lung(s),” says Alex Little, MD, a thoracic surgeon with a special interest in esophageal and lung cancer, and clinical professor at the University of Arizona.

“Differences are due to overall health and, of course, their smoking history.

“Thoracic surgeons are very interested in determining for individual patients their ability to function after resection of part of their lung; function is an important consideration.

“We want a patient to do more than survive a lung resection; they should have a reasonable quality of life without major restrictions.

“Accordingly we perform a battery of tests to determine the patient’s pulmonary function status and use those results to predict the postoperative lung function.

“What a person can tolerate in terms of loss of lung is dependent on what they start with before the loss.

“A person with advanced COPD [chronic obstructive pulmonary disease] might be unable to tolerate even a lobectomy (there are five lobes; three on the right and two on the left).

“In general, most patients do well after a lobectomy, which is the most common operation for lung cancer and roughly the loss of about 20% of lung tissue.

“Tolerating the removal of an entire lung (a pneumonectomy) is more of a challenge. 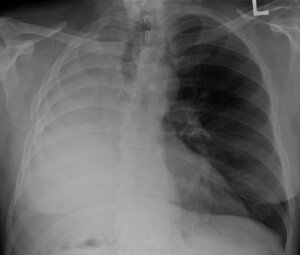 “A loss of the left lung represents about 45% of breathing capacity and right lung about 55%.

“Translated this means the loss of 55% of lung function is poorly tolerated.”

You probably won’t find any information online on what it’s like to live with one-half of a single lung.

Dr. Little explains, “I think the reason you could find no relevant info online is that the status of a patient only having half of one lung after an operation would, with rare if any exceptions, be identified by preoperative testing to not have sufficient functioning lung to survive.

“So a surgeon would not reduce them to that status, and consequently there is no experience for some surgeon to report.

“Almost all lung resections are performed for lung cancer, and nearly all patients are smokers and have some amount of emphysema. So they start with diminished lung function.

“It is theoretically possible that someone who started with normal lungs could survive with only 25% of their original lung function, but I can’t envision many scenarios in which this might occur.

“Perhaps a trauma victim who pre-trauma had normal lungs.”

Many decades ago, pneumonectomies were performed to rid an infected lung. The other lung was healthy.

Today’s pneumonectomies are due almost entirely to cancer from smoking, meaning, both lungs are in poor condition, even though only one has the cancer.

The noncancerous lung is still diseased from years of smoking.

Trying to survive on one-half of that remaining, but sickly lung, is not a pretty picture.

Another point is that usually (not always), lung cancer patients are over 50. After about age 35, lung function naturally decreases.

So the idea of living with half of a single lung is not looking good.

Certainly, if a 30-year-old nonsmoker with a perfectly healthy pair of lungs had all but half of their right lung removed (right = 55% breathing capacity), it’s possible they could live some years – but with a very take-it-easy lifestyle.

But this hypothetical situation is not likely to exist.

Dr. Little says, “Of this I’m certain: Someone limping along on 25% of normal lung function would be very limited in their activities and probably require supplemental oxygen.

“There are emphysema patients [with two lungs] with only 25% of predicted lung function, and they are very compromised and have a poor quality of life.”

In summary, someone who developed lung cancer and who had one lung removed — would have only short-term survival if they eventually had half of their remaining lung removed — IF in a hypothetical world, a surgeon ever even decided to perform such an operation.