Compulsive Snow Shoveling: Why Shovel Only an Inch? 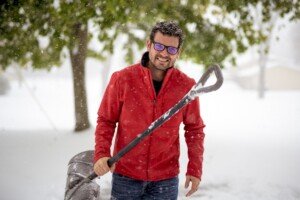 Do you know someone who shovels only an inch of snow or barely any slush right down to the concrete even though the sun is already melting it?

Does this person do any of the following?

• Continues “shoveling” the concrete to get every last bit of ice – even the size of a pancake – to the point where the shovel keeps scraping the asphalt.

• After shoveling down to the concrete, he or she doesn’t even use the cleaned area and instead goes inside for the rest of the day.

• He shovels an area where he, or others if it’s a multi-plex, are very unlikely to walk before the sun melts the snow.

• The shoveling is compulsive, as evidenced by the continuous sound of the metal scraping against asphalt or concrete.

• Often, when he or she is out there, the weather forecast says sunny for the ensuing days, including temperatures in the 40s – more than sufficient to melt the snow and ice by next day or even later that afternoon.

This Is Not Normal Shoveling

The man who used to live next door to me was 70 and in poor health. He walked unsteadily.

I don’t believe he compulsively shoveled for exercise, as shoveling is inherently an off-balance activity that’s hard on the back – especially the back of a frail elderly person who never works out.

But he’d be so intent on getting every last area of slush or already-melting ice that the metal of the shovel would continuously (and loudly) scrape against the asphalt.

The bizarre thing is that when he was finally done, he’d go inside for the day.

Next time he was out (to go to his car), the small amount of snow and ice that had been everywhere else had been completely melted by the sun.

Had he not done the shoveling, the area he had targeted would have been cleared up by the sun and warmer temperature come next day when he’d go out to his car.

The man who moved in after him, to my amazement, is almost as compulsive.

Behind our units is a walkway to a storage room for the residents.

After shoveling it, he does NOT use it, nor does the man in the unit further down.

Nobody ever needs to walk there before the sun melts the snow.

This second neighbor also shovels the 15 feet between his front door and car, even if the snow accumulation is an inch.

And need I say that following this, he goes back inside, not even using the cleared space between his front door and car.

Why not just wait for the sun to melt the snow?

The second neighbor acquired a roommate who also seems obsessed with shoveling, as evidenced by the video below.

Though it’s only a minute and 17 seconds, he was noisily going at it for 25 minutes, chopping and chipping away at a small patch of melting ice/slush near his car door.

Note how he eventually repeatedly rams the shovel vertically into the small patch, as though trying to kill an aggressive snake. Then he went inside for the day. 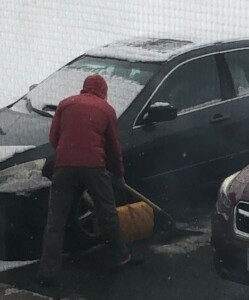 Look at him really going after that thin layer of slush!

Enjoy the video below. Note the sunshine and overall scarcity of snow, but boy, he really goes at it. Just keep watching to the end.

• Preparation for a second imminent snowfall. This reason doesn’t add up when the weather forecast is clear skies for the next few days.

• A good workout. My current neighbor gets plenty of exercise from hiking and dumbbell work. It’d be very strange if he thought that shoveling once every three or four weeks added anything valuable to his hikes and dumbbell routines.

• Fear of falling. If the previous elderly neighbor had a fear of falling, why go outside and shovel when he’d be much safer staying inside?

Remember, he never went out to his car after clearing the area.

The current resident is in his early 40s and regularly goes on mountain hikes in the winter.

It’s not believable that he shovels due to fear of falling on two, let alone one, inch of snow when he has no fear of hiking snowy mountain trails.

There’s also no incline where ice can build up and create a slipping hazard.

• Boredom. This is plausible, but it seems that one would rather read, watch TV, text, work a crossword, try some yoga or a new recipe or surf the Internet when bored rather than shovel snow, which is uncomfortable even for very fit people.

Though fit people can shovel for extended periods and never pull a muscle, feel exhausted or suffer from stiffness or back pain afterwards, it’s STILL an uncomfortable series of movements due to its nature – no matter how much you can deadlift at the gym or how heavy that kettlebell is that you do 20 swings with.

Plus, it’s in the cold, making it even more uncomfortable.

If boredom drives someone to shovel more than what’s necessary, then they must enjoy shoveling snow, which brings me to the next reason.

• They enjoy shoveling snow. This is difficult to imagine, but some people DO like this activity.

Perhaps the elderly frail man with the unsteady walk felt empowered doing something that usually younger people do. But it was dangerous for him.

“Despite the unfortunate overlap in names, these are two distinct and different conditions but can nonetheless present with some signs of perfectionism for different reasons,” continues Dr. Celan.

“For most people, perfectionism can be a habit instilled by parents or other people in a society that expresses disapproval for anything less than high achievement.

“There may be no mental illness associated with this habit of orderliness.

“If they are unable to meet their high standards for themselves, they may be a little put-off and strive to do a better job in the future, but they are not distressed all day as a result.”

Is it your business your neighbor compulsively shovels snow?

Yes, it is, when the unnecessary metal-to-concrete scraping wakes you up.

There’s no reason why a compulsive snow and slush shoveler can’t wait till later in the morning to do this, especially when the sun is out.

Remember, this is about non-essential shoveling – clearing every last pancake-sized patch of slush or non-threatening little patch of ice, and trying to clear a snow thickness of sometimes less than an inch.

Why not just walk atop the thin accumulation and spare your body the discomfort of shoveling?