How Many Esophageal Cancer Patients Had Untreated GERD? 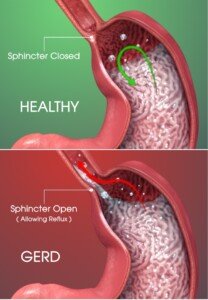 Chronic GERD can lead to a cellular change in the esophagus called Barrett’s esophagus.

About one percent of those with this pre-malignant condition – not GERD itself —  eventually develop esophageal cancer.

“As you know, in the U.S. and western Europe most cancer patients have adenocarcinoma preceded with a history of GERD, and many have a diagnosed Barrett’s esophagus,” says Alex Little, MD, a thoracic surgeon with a special interest in esophageal and lung cancer, and clinical professor at the University of Arizona.

The flipside question of what percentage of people with adenocarcinoma of the esophagus have a history of chronic GERD … is not precisely known.

Dr. Little points out that he is not aware of any documentation for this metric, but states: “I imagine nearly all these patients received some form of treatment for their GERD.

“This undoubtedly includes over-the-counter medications such as antacids and H2 blockers as well as proton pump inhibitors.”

It’s a well-established fact in the medical community that longterm acid reflux can cause changes in the esophageal lining, paving the way for Barrett’s esophagus.

In fact, the percentage of people with GERD who eventually are diagnosed with Barrett’s is 10 to 15%.

It’s not possible to derive from the one percent figure and the 10-15% figure what percentage of GERD patients end up with a malignant tumor in their esophagus.

But for sure, we know that A can lead to B which can then lead to Cancer.

With that in mind, it’s very important to prevent chronic acid reflux problems.

If you’ve already been diagnosed with GERD – even if the symptoms are only mild – you need to put measures in place to halt this condition.

Chronic, repeated issues with mild GERD symptoms are actually more potentially harmful to the esophagus than is the very occasional and acute situation of severe symptoms triggered by a large spicy meal and too much liquor.

Losing weight if you’re overweight, and quitting smoking if you smoke, are two big measures to put an end to gastroesophageal reflux disease.

Additional natural treatments include avoiding trigger foods (mint, citrus, caffeine, chocolate, alcohol), avoiding large meals close to bedtime and elevating your torso when sleeping (wedge pillow or propping up the head side of the bed at least six inches).