How Fast Does Esophageal Cancer Grow After Symptoms Begin? 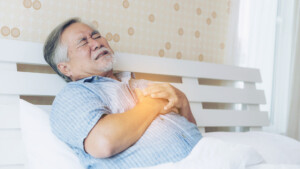 How long does it take for esophageal cancer symptoms to get severe after the onset of the first symptom?

At what point can you safely rule out this disease and be pretty sure that you only have a case of GERD?

The earliest symptom can be so mild that it can be mistaken for acid reflux.

One can have new-onset acid reflux that persists for many months and, during that time, gets worse.

As many laypeople know, untreated cancer will get worse and worse as the tumor grows, resulting in worsening symptoms – to the point where they can no longer be tolerated.

“The initial symptom patients with esophageal cancer notice is dysphagia: difficulty swallowing,” says Alex Little, MD, a thoracic surgeon with a special interest in esophageal and lung cancer, and clinical professor at the University of Arizona.

“Medicine defines a swallow as starting when the mouth is cleared — but not ending until food enters the stomach.

“Cancer patients clear their mouth normally, but the food has a challenge to pass the tumor in the esophagus.

“Presumably, a cancer begins with the transformation of one or a few normal cells into cancer.

“A single or even a clump of a few cells cannot block the esophagus and cause no symptoms.

“It is not known how fast a new cancer grows and advances, but this is inevitably the case, and the tumor bulk simply establishes a ‘roadblock.’

“Those of us who treat these patients have learned that from the time they first notice any change to their swallowing — usually a sticking sensation as the food passes — till they realize that there is a substantial problem with swallowing that is not going away and consult a physician — is a matter of weeks to a few months, not longer.

“Many at first compensate for the partial blockage by shifting their diet from solid foods to softer foods and liquids, but eventually food actually lodges, complete obstruction occurs, and, if they delay seeking help, the patient presents in great distress.”

“When a tumor is nearly or completely obstructive, if the patient persists in eating they will regurgitate the food that won’t pass,” says Dr. Little

“At this point the patient is malnourished, has lost a significant amount of weight, and has the debilitating effect of advanced cancer.

“So yes, fatigue would be a prominent symptom at this point.”

Another possible, though uncommon, symptom is a hoarse voice that won’t go away.

If you have time on your side from that first onset of symptom(s), and if there are no swallowing difficulties, AND you’re still having the symptoms, you should consult with a gastroenterologist.

Other non-malignant conditions can cause symptoms that overlap with GERD, such as an ulcer (which would be caused by GERD) and a hiatal hernia.

Your gastroenterologist may want to perform a diagnostic upper endoscopy.