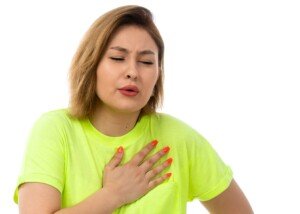 Is it GERD or esophageal cancer?

After all, both conditions can cause this symptom.

What’s even scarier is if you’ve already suffered from GERD for many years.

This is because long-term GERD can cause precancerous changes in the esophagus that can then lead to cancer.

“Dysphagia, difficulty swallowing, is the most common symptom in patients with esophageal cancer and to some degree is noticed by all patients except those with very early and small tumors,” explains Alex Little, MD, a thoracic surgeon with a special interest in esophageal and lung cancer, and clinical professor at the University of Arizona.

“Pain is an uncommon symptom (Christopher Hitchen’s experience being an exception, and he had far advanced disease).”

Hitchens was a well-known socio-political critic who eventually succumbed to this high-mortality disease.

“If the tumor is given time to invade local nerves or the spine (the esophagus touches the spine), it can cause pain, and this may have been the case for Hitchens.”

First: “When the tumor enlarges sufficiently to obstruct the passage of food, distension of the esophagus can hurt,” says Dr. Little. “This is called odynophagia: pain with swallowing.

“In my experience odynophagia is an uncommon symptom in patients with esophageal cancer.”

Second: “Spasm of the gastrointestinal tract at any location can be quite painful.

“This happens when the gastrointestinal tract is trying to use peristalsis [muscle contractions] to move a food bolus along and meets resistance; it just squeezes harder and causes a cramping pain.”

In other words, some degree of food impaction (the resistance) is required to create this situation.

“An esophageal cancer can cause this scenario and odynophagia results.

“However, dysphagia [difficulty swallowing] dominates the picture and, along with regurgitation, is what the patient complains of.”

Can the tumor itself cause chest pain associated with swallowing?

“I doubt the food contacting the esophagus near the tumor is painful,” says Dr. Little.

This would be because the tumor is not a wound, laceration, ulcer or inflamed area that would generate pain if contacted. A malignant tumor is a growth.

“I agree that odynophagia causing a person to fear they have cancer is unfortunate — but persistent chest pain needs evaluation, and that will clear things up [because it’s very likely GERD if caused by swallowing] even if a person has to fret for a while.

“Actually, real pain, not just discomfort or heartburn, in patients with GERD also is infrequent.

“I would recommend to any person experiencing persistent pain with swallowing to be evaluated.

“Pain, when it does occur in patients with esophageal cancer, does not have the characteristics of the heartburn due to GERD.

“It is not burning in nature and is always associated with dysphagia [difficulty getting food down the esophagus once it clears the throat].

“It is unusual for acid reflux to cause difficulty swallowing.

“Also, in the case of cancer the patient will need and seek immediate relief for the inability to swallow [they can easily clear food from the throat, but from that point on there’s difficulty getting it down the esophagus] — and a diagnosis will be obtained.

“GERD sufferers will continue to experience heartburn which may respond to treatment and/or persist until a diagnosis is made.”

In a small percentage of GERD cases, the symptoms do not respond much to proton pump inhibitor drugs such as Prilosec and Nexium.

This may sometimes be because the patient has not eliminated causative factors such as being overweight or reversing recent weight gain, smoking or eating large meals close to bedtime.