Should the Huge Birthmark on My Child Be Removed? 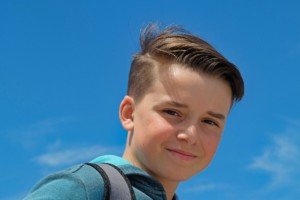 Does that big mole on your child have you worried and wondering if it should be surgically removed to prevent cancer?

It’s not always a cosmetic issue to a concerned parent. The idea of a large mole on one’s child might make the parent think it could one day turn into melanoma — a deadly skin cancer.

“Nevus” is another name for mole, and the plural is nevi (rhymes with Levi). “Congenital” means present at birth.

Even when these large birthmarks are in places nobody would normally see, such as the back of an upper leg, they can be worrisome to parents who know that large moles have a higher risk of transforming into melanoma when compared to small moles.

Should very large moles on a baby or child be electively removed?

“About five percent of the large congenital nevi have a risk of turning into melanoma,” says Dr. Joshua Fox, MD, founder and director of New York and New Jersey-based Advanced Dermatology P.C.

To some parents, five percent would be alarming enough for them to want the birthmark removed, as they would not want to be facing indefinite anxiety.

Dr. Fox continues, “These nevi must be observed” for possible signs of melanoma.

Signs to Look Out For

-A change in appearance over time (getting bigger, shape of border looking different)

-The mole is changing in shape — becoming more asymmetrical with time

-Red spots in the mole that weren’t there before

-Bleeding for no apparent reason

Dr. Fox explains, “However, it is not required to excise all large congenital nevi which do not possess the characteristics to become melanoma.

“Also, many excisions will leave a scar behind which is not very pleasing to many patients due to cosmetic reasons.

“There are institutions and some pediatric dermatologists who have advocated for removal of larger dysplastic nevi both to decrease anxiety, lower malpractice risk, and potentially help patients.  This is not my approach or the accepted standard for many reasons.”

The term “dysplastic” refers to atypical in appearance.

Removal of large birthmarks on a baby may be impractical.

If a baby has many huge dysplastic moles, this can present a problem as far as removal, versus if the baby has only one or a few large birthmarks.

Remember, only five percent can become melanoma, so what parents need to do is monitor large birthmarks in their child via monthly visual inspections.

A baseline photo should be taken; just keep track of your baby’s or child’s birthmarks — and they may never need to be removed.

In 1987 Dr. Fox founded the AAD Melanoma and Skin Cancer Prevention Program in Queens, NY. He has been chief of dermatology of several major teaching hospitals including Mt. Sinai Hospital of Queens.