Are You Feeling Sick and Tired Lately? Muscle Cramps Too?

Have you been feeling tired and sick with muscle cramps, just not feeling right, but your doctor can’t figure out what’s wrong?

Have you had all sorts of tests but they keep coming up normal?

Have multiple doctors actually told you that all your symptoms — even the muscle cramps — are due to stress and that you should just try to relax more?

There’s a very high chance that you’ve been misdiagnosed as suffering from stress or anxiety, or perhaps from not getting enough sleep.

But if you’ve also been experiencing insomnia, this is a symptom, not a medical condition.

What Your Doctor Should Test For

“Primarily, the disease has hundreds of symptoms that can mimic other problems, so if the possibility of celiac is not on the physician’s radar, the tests are not ordered.”

The irony is that the screening test for celiac disease is a simple blood test; nothing at all complicated.

Maybe you’ve heard of celiac disease and believe you can’t possibly have it because:

1) You’re older or 2) Your symptoms don’t include diarrhea or other digestive distress.

Here’s a surprise: Most people with celiac disease do not experience diarrhea or constipation. 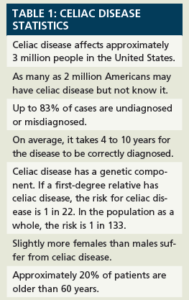 Dr. Guandalini continues, “The underlying issue, of course, is that physicians in the U.S., until very recently, were taught that celiac disease was very rare, which we know is incorrect.

“It is part of our mission to re-educate medical professionals about celiac disease in hopes of raising awareness and diagnosis rates.”

The current estimate is that about one out of 100 people have CD. Most people who have the condition don’t have symptoms. They are usually tested when a family member with symptoms is properly diagnosed.

And the symptoms sometimes include feeling more tired than usual, or just a feeling of being sick or not well. Muscle cramps and joint pain are possible.

Feeling sick or tired and having muscle cramps can be caused by many other disorders, but celiac disease can easily be ruled out — or in.

When your doctor was in medical school, he or she may have heard a 20-30 minute celiac disease lecture during four years of classes. Medical textbooks still contain outdated information.

This is changing, however. More and more doctors are alert to the possibility of this autoimmune condition in a patient presenting with feelings of malaise, fatigue, tiredness, muscle cramps and various other “unexplained” symptoms.

If you’re feeling ill and run-down and have been diagnosed with depression, anxiety, chronic fatigue syndrome, fibromyalgia or anemia, request a blood test for celiac disease, which can cause fatigue, psychiatric issues and anemia.

In addition to fatigue, feeling unusually tired and muscle camps, Celiac disease can cause the following:

• Tingling/numbness in the legs and feet