Tingling, Numbness and Pain in Both Hands Isn’t Always CTS 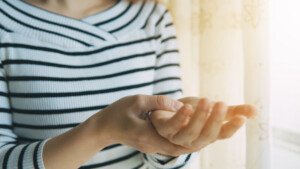 Pain, numbness and tingling in both hands can easily be misdiagnosed as carpal tunnel syndrome. Another, much less known condition can mimic CTS.

Sometime in early September 2018, I started feeling pains of tingling and numbness in both of my hands, primarily in the mornings when I’d wake up.

Initially, I thought this was caused by poor sleeping habits, but after occurring several nights in a row I was starting to get concerned.

After about a week, the pain increased, sending a throbbing sensation throughout my hands.

Using terms such as a nerve separation or spiderwebbing explosion, the pain almost always originated from a single point at my wrist.

There was a hot fiery electrical sensation associated with the pain. Tasks such as opening circular or spherical doorknobs and turning it, or trying to remove the lid off a pickle jar, would usually activate it.

Simple things like brushing my teeth or doing the dishes were arduous. Anytime I had my hands slightly elevated from my body, my arms felt fatigued.

I decided to see my GP. She referred me to a specialist in neurology.

The neurologist asked several questions. He ran a few tests to reproduce the pain.

Then there was a nerve conduction procedure which was mildly uncomfortable. The second test — an electromyography — was more invasive. 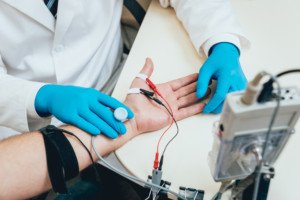 His test indicated that I had mild carpal tunnel syndrome in both hands. I did some research and found it was rare to have it bilaterally, so I was skeptical of his diagnosis.

Not only that, but my symptoms did not feel mild. Sometimes they were downright disabling.

He suggested a cortisone shot in both wrists which could allow for several months of reduced swelling for the general discomfort.

He started off with a cortisone shot in my left wrist. I experienced a cortisone flare; a temporary reaction of increased pain as it binds inside the tissue.

I felt no relief once the reaction from the cortisone subsided.

The neurologist recommended a carpal tunnel release. I was not willing to undergo the surgery to alleviate symptoms of a condition that I may or may not have developed.

My GP decided to refer me to another type of doctor. She suspected the origination might be further up my arm, perhaps near the shoulder joint area.

I met with the specialist; he was engaged as I described the events that occurred, and I felt as if perhaps he knew what I’d been going through.

Next, he performed some tests. Raising my arms straight up in the air, he took my pulse which could indicate a compression at some point from my thoracic spine. There was a noticeable reduction.

He had one of his technicians perform a vascular ultrasound.

Throughout parts of the test, I was instructed to move my arms throughout many positions. The computer hooked up to the ultrasound recorded the pressure and speed of my blood flow.

I had a condition known as thoracic outlet syndrome (TOS): a compression of the brachial plexus.

This is an area where a network of nerves, including the subclavian artery and subclavian vein, pass through the scalene muscles in the neck, underneath the collarbone and over the first rib.

When these muscles become overactive, they tend to squish the network of nerves directly exiting the cervical and thoracic spine or between the pec minor and the rib.

The doctor said it can be brought on by a sports injury or automobile accident.

Other times it might be caused by repetitive motions from work or extreme amounts of stress (tightening your scalene muscles unnaturally through periods of emotional trepidation can trigger symptoms).

Some people who suffer from TOS have an extra rib above the first. This “cervical rib” is a genetic inheritance and present at birth. However, this anomaly is very rare.

The doctor wanted to run a few more tests to rule out other possibilities of cause.

After a CT scan and two MRI’s and an X-ray, the results were negative. I did not have the cervical rib.

I required physical therapy from anywhere between one to six months depending on the severity of my thoracic outlet syndrome, and how well I responded to the exercises. Surgery was not required.

What I required was muscle strengthening and stretching, isolating the proper areas and targeting them.

I found a physical therapist and booked my first appointment. She showed me some basic home stretches and exercises to strengthen specific muscles. After several months I started feeling some relief.

I continued with the exercises for well over a year, but the biggest amount of relief came within those first few months.

Generally speaking, I don’t have to do the exercises regularly anymore, only when I feel like impending pain just around the corner. I have since joined a TOS forum on Facebook to connect with others like me.

Kimbery Ashington was born and raised in Kelowna, BC, and has been residing in the Greater Toronto Area since 2010. She is managing editor at RateRaiders.ca and passionate about helping Canadians navigate the waters of their finances. Check out her article on how to destroy bad credit. Twitter: @rateraiders