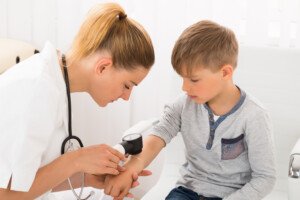 The ABCDE rules of melanoma screening for adults don’t apply to children.

There are distinct differences in the way melanoma appears in kids than it does in adults.

The difference in appearance does not apply to every single case, but rather, to enough cases such that a different set of screening rules has been devised for checking the skin of children.

A study conducted by Cordoro et al found that:

• Sixty percent of children under 10 years did not meet the traditional criteria for the ABCDE guidelines.

• Forty percent of adolescents also did not meet the criteria.

• Because of this, up to 82 percent of diagnoses took longer than six months after the first detection of the worrisome skin spot.

We can still refer to the guidelines as “ABCDE,” but the letters stand for different things. 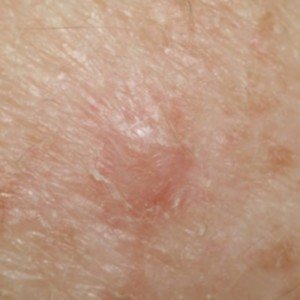 B = Bleeding or Bumpy. These features, too, occur in adults, but are just more common in the pediatric population.

A new bumpy lesion, in fact, may resemble a wart and even be diagnosed as a wart by a pediatrician – when in fact – it’s melanoma.

“Bleeding lesions that have seemingly no cause can be a sign of the condition,” says Dr. Gretchen Frieling, MD, Triple Board Certified Boston Area Dermatopathologist.

“Consult your doctor if you observe this. The bleeding does not have to be profound or excessive, but if the skin has spots of blood with no apparent cause, it’s better to be safe than sorry.”

C = Color, as in, uniform. “In children, you may just see one color, which means parents need to also consider the other signs of melanoma,” says Dr. Frieling.

“In adults, you can identify suspicious spots by the abnormality and plurality of colors. Red, pink, purple, black, brown and some abnormal flesh-colored growths [amelanotic] can all be signs you should consult your doctor.” 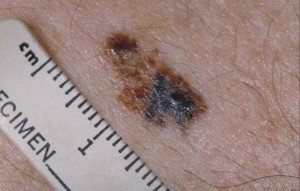 D = De novo, Diameter. De novo means that the cancer arose out of regular skin rather than out of a pre-existing normal mole.

Diameter means that, more so in children, melanomas are smaller than six millimeters.

Adults are typically warned to keep an eye on moles that are at least the diameter of a pencil eraser.

Though adults can be diagnosed with melanomas as small as two millimeters, again, this is more common in kids.

E = Evolution. This is the only guideline that adults and children more identically share for melanoma screening. This refers to a mole changing over time.

“In adults, melanoma is typically flat, but in children, it can often be raised,” says Dr Frieling.

“In any case, any abnormality with a spot on a child’s or adult’s skin should be checked.

“Children can also experience overgrown moles or growths. If these moles grow larger than any other mole on the child’s skin, you should speak with the specialist.”

A Symptom Equally Common to Adults and Children

“If you see an open lesion in a child and it heals, you may avoid thinking of it again,” begins Dr. Frieling.

“However, in both children and adults, open skin can heal and then begin to bleed or tear again.

“The key is to watch for abnormalities and spots or lesions that were not there before and/or that may be growing at an advanced rate.

“You should never be shy about speaking to your child’s doctor in regards to a suspicious spot. Some of the signs of melanoma can be different in children than it is in adults, but early detection can save you and your child stress.”

“Don’t Worry About It”

Insist on a biopsy. In fact, to play safe, get a second biopsy from a different lab, because false negative diagnoses are more likely with childhood melanoma than with adult.

Not only do these cancerous tumors often look innocent to the naked eye in the pediatric population, but they may also appear innocent under a microscope.

Dr. Frieling’s website is gfacemd.com. In addition to 10+ years of experience in dermatology and dermapathology, Dr. Frieling provides advanced micro-enhancement techniques to optimize the health and beauty of her patients’ skin.