Why Do Models, Plus Size or Thin, All Have the Same FACE? 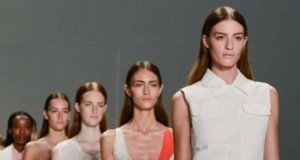 Why doesn’t body inclusivity in the modeling world extend to faces?

White, black or Asian, runway models including plus-size have the same face.

What Facial Inclusivity Is NOT

What Facial Inclusivity IS

No matter how diverse the body types are in any given fashion show or advertisement for a major brand, one thing is predictable: the models’ faces.

At first glance, you may think there is diversity, but do not let different hair colors, hair textures and skin tones trick you into seeing truly diverse facial structures.

The SAME mask fits snuggly on virtually every single model’s face in all of those body inclusivity fashion shows. 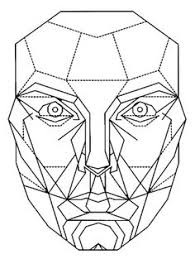 This “beauty mask” is based on the “Golden Ratio” of 1:1.618 and was created by Stephen R. Marquardt, MD, a plastic surgeon and expert on facial beauty analysis.

As you can see, racial diversity is not relevant to fitting the mask.

The Golden Ratio is seen extensively in nature including the spirals of galaxies, bands of hurricanes, arrangement of flower petals, number of tree branches as they split off the trunk higher and higher, and the dimensions of a single human DNA molecule.

It also comes up in classic ancient architecture plus modern architecture, classic and modern paintings and even the dimensions of a credit and gift card! Divide the width by the length and you’ll get close to 0.618.

Architects, artists and designers know that the ratio yields more visual appeal than any other.

So if this ratio repeatedly comes up with various facial measurements such as width of the nose relative to width between the outer nostril and outer cheek, it only stands to reason that the most attractive faces closely fit the mask.

You’ll never find a “supermodel,” plus-size or not, who doesn’t have a Golden Ratio face.

Though such a face isn’t necessarily gorgeous (e.g., Giselle Bündchen and Kate Moss — and that’s when she was much younger), it has a distinct appearance that modeling agencies and runway casters just love. Below are two faces that look very typical of models even plus-size. 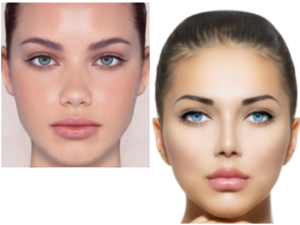 Why aren’t body inclusive influencers challenging the absence of the following types of faces in the modeling world?

Not surprisingly, the mask snuggly fits the faces of women who were famous for iconic beauty: 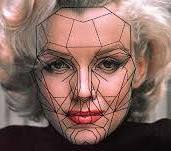 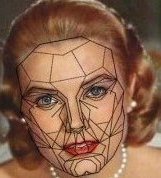 Though a Victoria’s Secret model’s face may not stun to the level that the above screen sirens do, a major-league model’s face always has that certain look – those features for which the mask fits so well.

Unattractive Face Completely out of Synch with the Mask 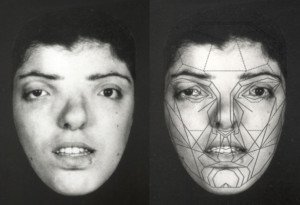 The vast majority of models for runways and print work (major gigs) have the following features:

Why the Fixation on Only the Neck Down?

I fully understand why only those models with Golden Ratio faces are chosen for work. After all, as a blogger and writer, I use only attractive faces to accompany my articles, though I occasionally make exceptions based on topic and availability of images that match the topic.

So what’s my beef then?

It’s my observation of plus-size models and influencers who push for body inclusivity but focus only on the neck down.

This is very odd. Is it because they don’t think women who look like Ann Coulter or Sandra Oh should strut down a catwalk?

If so, they are just as exclusive as the folks who cast only size 4 models or the voluptuous hour-glass shapes like Ashley Graham and Hunter McGrady for catwalk work and ignore the women who have big block-shaped bodies like Rosie O’Donnell and Roseanne Barr.

An inclusivity influencer might say, “Well gee, who wants to see a model strutting down the runway with a face like Tori Spelling’s?”

But by the same token, the people who cast the models might be thinking, “Who wants to see a model who has a waistline and ass like Rosie O’Donnell’s?”

It’s Human Nature to Be Drawn to Visually Appealing Things

• We choose the prettiest or most attractive pictures to hang on walls.

• Would you ever present a cake at your dinner party with frosting put on by your five-year-old?

• What about curtains, vases and earrings? Only the most attractive will do.

Again, I’m not asking why women with homely faces aren’t given modeling jobs.

My question is directed to the plus-size influencers who’ve created an uproar over why there’s not more “body diversity” or “body inclusivity” in the modeling world – yet at the same time, they’re perfectly content with ALL the models having that same kind of face!

In fact, why don’t Ashley Graham and Tess Holliday admit that if they had faces like Sandra Bernhard or Rosie O’Donnell, they would have never landed any modeling gigs?

With that all said, there are a handful of agency-signed models whose faces do, indeed, deviate from the Golden Ratio — such as Tin Gao’s. But this movement currently equates to spitballs on a battleship.