Can Multiple Sclerosis Start with a Twitching Nose? 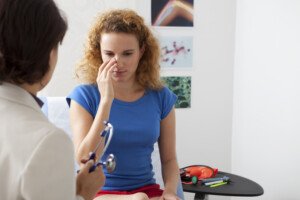 There actually is a type of facial twitch that’s associated with multiple sclerosis.

However, this data needs to be picked apart very carefully, which is why the statement, “A twitching nose can be an early sign of MS,” is flawed.

First off, ask yourself where you got the idea that a twitching nose might be a sign of multiple sclerosis.

Healthline.com says that “involuntary muscle spasms are common with MS.” A muscle spasm is not a twitch or fasciculation.

Healthline.com goes on to describe spasms as “uncontrollable, painful jerking movements of the extremities.” The site also says MS can cause “uncontrollable shaking” (tremors).

So don’t assume that a spasm in a leg or arm means the same as a twitch in the nose.

“Facial muscle twitching,” however, is listed as an MS symptom on medicinenet.com. Not surprisingly, there’s no additional detail.

People who are freaking that a new-onset twitch in their nose is MS have invariably spent a lot of time googling about this.

I’m an expert at googling for medical information. I know where to look for the most accurate and detailed information, and which sites to avoid like the plague.

I also know how to recognize when information on what seems like a reliable site is actually not reliable.

Such is the case with verywell.com. A frantic person with a twitching nose, googling for multiple sclerosis symptoms, will sooner or later find what I found.

I found two articles on the same page by the same author. The first one says, “No, fasciculations have pretty much nothing to do with MS.”

Her second article right below it says, “Muscle Twitches and MS: It’s one of the more unusual symptoms of MS, but it does occur.”

This second article has a revision date that precedes the revision date of the first post by several months. Both articles can’t be right. But neither is accurate, as you’re about to find out.

Multiple Sclerosis Can Cause Facial Twitching

There are two kinds of muscle twitching: fasciculations and myokymia. In the Postgraduate Medical Journal, the authors admit that these two conditions “have been confused in the past.”

Fasciculations and myokymia are NOT one and the same.

“Continuous facial myokymia in MS is caused by a pontine tegmental lesion involving the postnuclear, postgenu portion of the facial nerve.”

“Continuous facial myokymia is an involuntary undulating, vermicular [worm-like] movement that spreads across facial muscles and is associated with a characteristic electromyographic pattern.

“It is an infrequent clinical sign that almost always occurs in intrinsic brainstem lesions, particularly in multiple sclerosis (MS).”

• It “spreads across facial muscles,” which is different data than “My nose keeps twitching.”

• “It is an infrequent clinical sign.” At least it’s not common, but we still don’t know if the nose is ever involved in facial myokymia.

• Did you catch another key word? “Continuous.” Does your nose twitch continuously? If it does, don’t panic yet.

There is a report called “Facial myokymia: a clue to the diagnosis of multiple sclerosis,” in the Postgraduate Medical Journal (November 1972) 48, 657-661.

From 1969 to 1971, there were found only “forty cases [with facial myokymia] reported in the world literature and added two of their own,” states the paper, referring to numerous MS researchers.

The paper continues: “Of these cases, in twenty-three the diagnosis of multiple sclerosis seemed ‘well established, or at least quite likely’ and at least ten had intrinsic pontine tumours.

“Thus, over half the reported cases [of facial myokymia] have been associated with multiple sclerosis.”

WAIT…Wait…do not panic over “tumours.” This report states that a tumor that causes facial myokymia also causes significant facial weakness and paralysis! So if your only problem is a twitching nose, you can relax.

The report is lengthy, but here’s another excerpt:

“Only single cases or very small series of patients with facial myokymia have so far been reported in the literature.

“Among the most noteworthy of these is the report of Anderman et al. (1961) who described four personal cases and found seven in the literature.

“Matthews (1966) described six patients and found twelve in the literature, and the condition was reviewed in the British Medical Journal (1966).

“Gutman et al. (1969) described two patients and found forty in the literature. From these reports facial myokymia emerges as a rare phenomenon with distict [sic] characteristics.”

You should be asking yourself, “What are the odds that my twitching nose is a sign of multiple sclerosis?”

Another excerpt is as follows: “The relationship of facial myokymia to multiple sclerosis is important.

It is clear that in the twenty-three patients in the literature and in the present three cases that a causal relationship obtains [sic].

“In the vast majority of patients in whom facial myokymia has been transient and in whom there has been no significant facial paresis, the phenomenon has been associated with multiple sclerosis.

“The nature of the pathological process in the few without clinical evidence of multiple sclerosis remains obscure.

“It is of course possible that these patients too may suffer from multiple sclerosis, the myokymia being the first evidence of demyelination.

“Most of these patients are in the age-group most vulnerable to multiple sclerosis, but further episodes of neurological disease have not appeared in periods varying from 5 to 6 years in three of Matthews’ patients.”

You should be asking yourself, “What are the odds that my twitching nose is a sign of multiple sclerosis?”

Even if you consider yourself a very unlucky person, being that 400,000 people in the U.S. have MS, do you realize just how astronomically small the chances are that your twitching nose is due to this disease?

And besides, you don’t EVEN KNOW if the twitching is actually myokymia. Do you know how to tell the difference between a fasciculation twitch and a myokymia twitch in your nose?