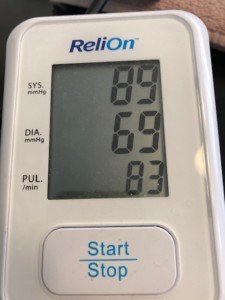 Is the top number of your blood pressure reading sometimes 89 and the bottom number 69?

Does a blood pressure of 89 over 69 necessarily indicate a medical problem?

The image at the top of this post, showing a blood pressure reading of 89 over 69, is not staged.

That’s an actual reading of my blood pressure, taken with a reliable home device after sitting relaxed for at least five minutes and applying the cuff to a sleeveless arm.

I know it’s accurate because it’s not anomalous; I often get readings in which the top number is in the 90s, even low 90s. In fact, on a number of occasions the reading was something like 96 over 59.

89 Over 69 Blood Pressure: Should You See a Doctor?

“89/69 may be normal for a fit, active person who exercises regularly…low BP and HR is usually associated with athletes,” says Teri Dreher, RN, CCRN, an award-winning RN patient advocate and pioneer in the field of private patient advocate.

Dreher, a critical care nurse for 30+ years, is owner/founder of NShore Patient Advocates in Chicago. She is also a former cardiovascular nurse clinician for Wisconsin Heart and Vascular.

I’ve been working out hard and intensely for years, crushing it at the gym and ignoring those nutty warnings about exercises that people over 40 should never do.

I train heavy and fierce, and this goes a long way at keeping my baseline blood pressure so low – even though it spikes during heavy lifts (which is a normal response to moving against resistance).

In addition, the cleaner my diet is, the lower my blood pressure. If I’ve been eating too much junk food, the systolic will be more often above 105, sometimes in the one-hundred teens. This scares me, because 120 is the cutoff point for pre-hypertension.

Once I’m back to a primarily whole foods diet, that top number dips good – and I’m elated.

I have no symptoms of blood pressure that’s too low (hypotension), which would include a dizzy or lightheaded feeling, or feeling faint at times, or feeling like you’re going to pass out when you rise from a seated position.

There is also no fatigue or shortness of breath other than right after a strenuous exercise set.

But what about the top and bottom numbers being so close to each other?

Dreher explains, “A narrow margin between the systolic and diastolic with symptoms MAY be associated with aortic valve problems.

“I would watch the trend rather than an isolated BP reading which may be inaccurate due to the person reading it or improper application of the BP cuff itself.”

This is something that cardiac nurses and cardiologists pay close attention to, because in chronic heart failure, the heart’s pumping action is impaired.

So if this is combined with very low BP, the patient won’t be getting an adequate amount of blood circulated throughout their body – leaving them feeling easily fatigued and short of breath.

If the patient is on high BP medication, the dose may be lowered (heart failure patients often have hypertension).

A diuretic drug such as Lasix, which is often prescribed for heart failure to manage fluid retention, can lower blood pressure.

If BP gets low, a doctor may lower the dose of Lasix, knowing that this could result in more fluid buildup. It’s a tricky balancing act.

If your home-reading blood pressure is 89 over 69 or similar, and you have no symptoms (e.g., blurred vision, nausea) and, in fact, do very well with gym workouts and other exercise, chances are that it’s your normal – influenced by exercise and a healthful diet.

Nevertheless, you should mention it to your doctor anyways.

Keep in mind that BP readings done at a doctor’s office tend to be higher than the normal range with home devices due to the anxiety: “white coat syndrome.”