On one hand, a benign pink mark from trauma can resemble the pink or “red” of a blood clot.

A harmless bruise can also be large and quite ugly, while a blood clot that looks like a mere dark pink area can lead to a fatal condition.

Certainly it’s not practical to rush to the emergency room every time you discover a pink or reddish area on your skin or feel a tender spot on your leg.

But there are key signs of a harmless bruise vs. a dangerous blood clot to be on the lookout for.

“Harmless bruises are usually associated with some type of trauma, i.e., bumping one’s leg or a heavy object falling upon it,” says Teri Dreher, RN, CCRN, an award-winning RN patient advocate and pioneer in the field of private patient advocate.

Dreher, a critical care nurse for 30+ years, is owner/founder of NShore Patient Advocates in Chicago. She is also a former cardiovascular nurse clinician for Wisconsin Heart and Vascular.

But just because you don’t recall the trauma (e.g., “Where did this bruise come from?”) doesn’t mean you should worry about the bruise.

“The bruise will be painful and discolored all over and eventually fade; a bruise is caused by capillary bleeding and will eventually reabsorb,” explains Dreher.

• The site of the trauma will first appear pink or reddish.

• The pattern of color changes in a trauma bruise is predictable regardless of its location.

• From the pink or red the bruise will then become dark blue or purple, which can occur only a few hours after the incident. The bruise at the top of this post was caused by a cricket ball.

• Over the ensuing days the color will lighten and appear a faded yellowish-green or yellow, eventually disappearing.

A bruise from trauma will not cause a blood clot, so it’s not necessary to worry that the nasty bruise you sustained after walking into a piece of exercise equipment might turn into a blood clot.

“A sudden painful area behind the knee or calf with lower extremity swelling should be evaluated by an MD,” says Dreher.

A deep vein thrombosis (DVT). The most common site is the lower leg, but many also form behind the knee and in the upper leg. 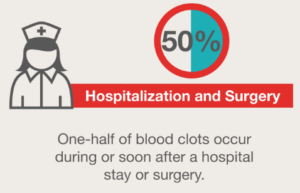 If you haven’t recently had surgery or a hospital stay, but you have these symptoms — a doctor may ask if you’ve done any air travel recently, or if you’ve recently spent hours cramped in a vehicle on a long trip.

“When in doubt, an ultrasound Doppler study may be ordered,” says Dreher.

“This may be associated with inactivity, blood clotting disorders or slow blood flow to the area, among other conditions.”

The more risk factors you have for a DVT, the higher the index of suspicion will by on the part of the doctor.

Other risk factors include being on birth control, obesity, smoking and recent joint replacement surgery.

“A blood clot usually does not have bruising and may be associated with a positive Homan’s sign: increased pain when toes are pointed up towards the head,” says Dreher. “When in doubt, call your doctor.”

A harmless bruise from trauma may be very tender or sore to the touch, and as the bruise fades, the tenderness also fades.

But the bruise will not cause pain when you move the limb it’s on. However, movement of the leg that’s affected by a DVT may cause pain or cramping, which may or may not subside with non-movement.

A DVT may also cause a tender feeling when you press on the area.

As you can see, there is some overlap with the symptoms of a deep vein thrombosis and those of a benign bruise or muscle pull.

But the one symptom that a DVT may cause – that neither a muscle pull nor bruise will cause – is a very warm or “hot” feeling in the affected area.

But then again, not all deep vein thromboses cause this extra warm sensation.

Like Dreher says, when in doubt, see a physician. Don’t wait for something to happen if you suspect a blood clot.

“The danger of a clot would be increased risk of the blood clot inside the vessel breaking loose and going to the brain or heart, causing a heart attack or stroke,” says Dreher.

The dislodged clot can also end up in the lungs, where it can be deadly.

“The best prevention is regular exercise/activity,” says Dreher, referring to deep vein thromboses. In addition, stop smoking if you do, and lose any excess weight.

Signs that a Blood Clot Has Traveled to the Brain, Heart or Lungs

• Sudden chest pain, especially if accompanied by jaw, arm and/or back pain

Any bruising that lasts for longer than a few weeks should also be evaluated, especially if the area is still very painful.

New bruises that you know for sure were not caused by trauma should also be evaluated.